AUD/USD trades in a narrow range as it snaps the series of lower highs and lows from the previous week, and the exchange rate may stage a larger rebound as the Relative Strength Index (RSI) appears to be reversing from oversold territory.

AUD/USD cleared the August low (0.7076)amid growing speculation for a Reserve Bank of Australia (RBA) rate cut, but the bearish momentum seems to be abating as the RSI fails to push into oversold territory to reflect the extreme readings seen in March.

In turn, the rebound from the monthly low (0.7006) may gather pace as AUD/USD remains influenced by the inverse relationship between the US Dollar and investor confidence, and a further recovery in global equity prices may fuel a further appreciation in the exchange rate as the Federal Reserve’s balance sheetwidens for the second week to reach its highest level since June.

However, the Australian Dollar may face headwinds ahead of the next RBA meeting as Deputy Governor Guy Debellewarns that “under the central scenario, it would be more than three years before sufficient progress was being made towards full employment to be confident that inflation will be sustainably within the target band.”

In turn, the ASX 30 Day Interbank Cash Rate Futures reflect a greater than 60% probability for a rate cut on October 6, but it remains to be seen if the RBA will push the official cash rate (OCR) to a fresh record low as Treasurer Josh Frydenberg is scheduled to deliver the federal budget update on the same day.

As a result, the RBA may stick to the sidelines after tweaking the Term Funding Facility (TFF) in September, and more of the same from Governor Philip Lowe and Co. may prop up AUD/USD as the central bank appears to be in no rush to deploy more non-standard measures.

Until then, swings in risk appetite may continue to influence AUD/USD, but the recent shift in retail positioning warns of a potential change in market behavior as traders turn net-long for the first time since April. 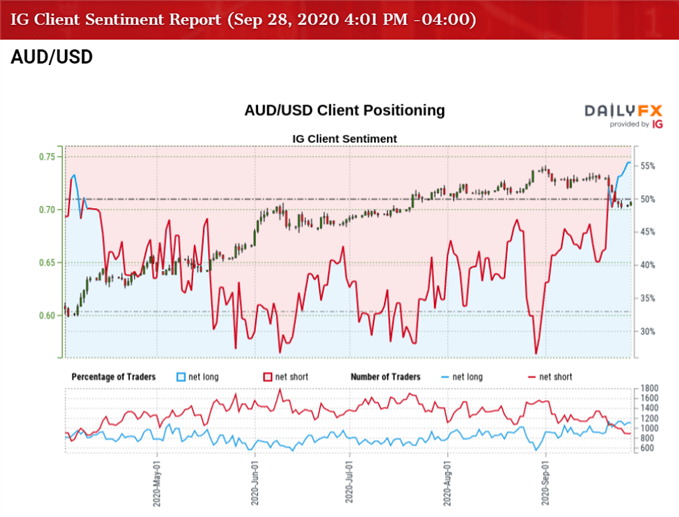 The decline in net-short position could be indicative of profit-taking behavior as AUD/USD rebounds from the monthly low (0.7006), while the rise in net-long position indicates a potential change in trend as the exchange rate pushes below the 50-Day SMA (0.7202) for the first time since April.

With that said, AUD/USD may stage a larger rebound as the bearish price sequence unravels, with the RSI reversing from oversold territory, but the rebound in the momentum indicator may end up being short-lived as the oscillator establishes a downward trend in September.