EUR/USD takes out the August low (1.1696) as it extends the series of lower highs and lows from earlier this week, and the exchange rate may face a further decline over the coming days as the Relative Strength Index (RSI) continues to track the downward trend carried over from the end of July.

EUR/USD trades to a fresh monthly low (1.1651) as the congressional testimony from Chairman Jerome Powell indicates the Federal Reserve will rely on its current tools to support the US economy, while a growing number of European Central Bank (ECB) officials appear to be jawboning the Euro as the Governing Council struggles to achieve its one and only mandate for price stability.

During an interview with Bloomberg News, ECB board member Yves Mersch warned that “the recent movement in the exchange rate has had statistical effects on some of our measures of inflation and production,” with the official going onto say that the Governing Council “will monitor very closely the effects of exchange rate developments on our efforts to attain our objective of price stability.”

However, it seems unlikely the ECB will intervene in foreign exchange markets as ECB Vice-President Luis de Guindos warns that “it would be suicidal to enter into any sort of dispute about exchange rates,” and it remains to be seen if Governing Council will implement more non-standard measures to foster a stronger recovery as “the ECB stands ready to adjust all of its instruments as appropriate.”

In turn, the ECB may stick to the sideline at the next meeting on October 29 as President Christine Lagarde and Co. emphasize that the EUR 1.350 trillion envelope for the pandemic emergency purchase programme (PEPP) “should be considered a ceiling rather than a target,” and swings in investor confidence may sway EUR/USD over the coming days as the appreciation in the US Dollar coincides with the decline in global equity prices.

Nevertheless, the tilt in retail sentiment looks poised to persist even though the ECB continues to endorse a dovish forward guidance for monetary policy as traders have been net-short EUR/USD since mid-May. 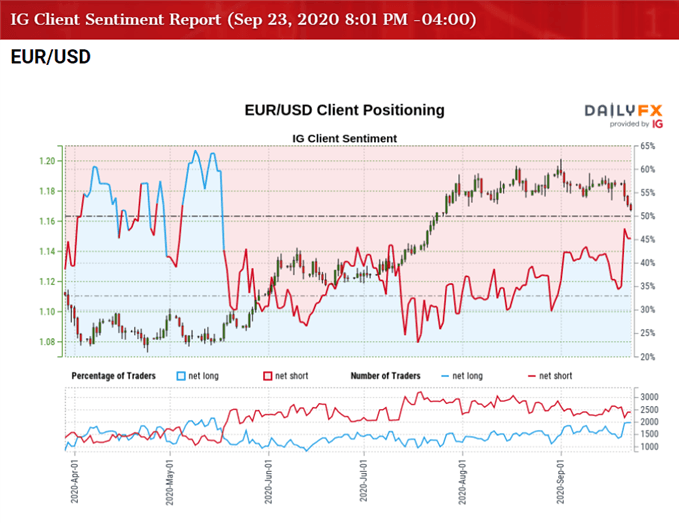 The rise in net-long position has helped to alleviate the tilted in retail sentiment as only 37.98% of traders were net-long EUR/USD last week, but the rise in net-short interest suggests the crowding behavior will carry into the end of the month even though the Fed’s balance sheet holds above $7 trillion in September.

With that said, the pullback from the yearly high (1.2011) may prove to be an exhaustion in the bullish price action rather than a change in trend amid the ongoing skew in retail sentiment, but EUR/USD may face a further decline over the coming days as the Relative Strength Index (RSI) continues to track the downward trend carried over from the end of July.