AUD/USD extends the series of lower highs and lows from earlier this week on the back of US Dollar strength, and the exchange rate appears to be on track to test the August low (0.7076)as the Reserve Bank of Australia (RBA) provides further details regarding the options for monetary policy.

AUD/USD trades to a fresh monthly low (0.7128) as the advance in the US Dollar coincides with the decline in global equity prices, and a further shift in risk sentiment may keep the exchange rate under pressure as the RBA warns that “under the central scenario, it would be more than three years before sufficient progress was being made towards full employment to be confident that inflation will be sustainably within the target band.”

Recent remarks from Deputy Governor Guy Debelle suggest the RBA will take additional steps to support the economy after tweaking the Term Funding Facility (TFF) in September as the board member outlines four options for monetary policy, which includes expanding the yield target program, intervention in foreign exchange markets, lowering the “current structure of rates in the economy a little more without going into negative territory,” as well as a negative interest rate policy (NIRP).

Debelle insists that “the Board will continue to assess the merits of the range of monetary options to best support the economic recovery” as the official cash rate (OCR) sits at the record low of 0.25%, and the central bank may continue to prepare Australian households and businesses for additional monetary support “given the protracted nature of the recovery.”

It remains to be seen if the RBA will deploy more non-standard measures at the next meeting on October 6 as Treasurer Josh Frydenberg is scheduled to deliver the federal budget update on the same day, but the crowding behavior in AUD/USD looks poised to persist over the coming days as retail traders have been net-short the pair since April. 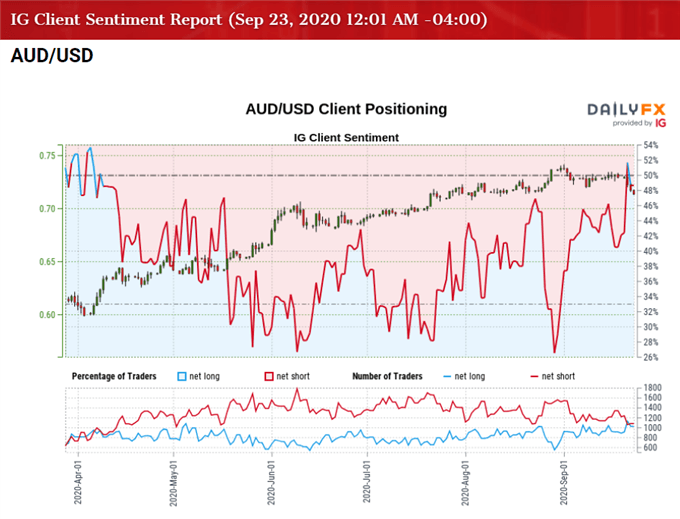 The decline in net-long position could be a function of stop-loss orders getting triggers as AUD/USD trades to a fresh monthly low (0.7128), while the decline in net-short interest has helped to alleviate the tilt in retail sentiment as only 44.86% of traders were net-long the pair last week.

With that said, a further decline in AUD/USD may spur a larger shift in retail positioning as the exchange rate trades below the 50-Day SMA (0.7201) for the first time since April, and the exchange rate appears to be on track to test the August low (0.7076) as it extends the series of lower highs and lows from earlier this week.