EUR/USD snaps the monthly range as the Federal Reserve sticks to the status quo in September, and the Relative Strength Index (RSI) indicates a larger correction for the exchange rate as the oscillator reverses ahead of trendline resistance to retain the downward trend carried over from the end of July.

EUR/USD fails to retain the advance following the European Central Bank (ECB) meeting and trades to a fresh monthly low (1.1737) as the update to the Fed’s Summary of Economic Projections (SEP) shows no change in the interest rate dot-plot.

The reaction suggests market participants were anticipating a more dovish forward guidance as the Federal Open Market Committee (FOMC)plans to “achieve inflation moderately above 2 percent for some time so that inflation averages 2 percent over time,” but the central bank appears to be in rush to alter the path for monetary policy as the longer run interest rate forecast remains unchanged from the June meeting.

It seems as though the FOMC will rely on its current tools to support the US economy as the central bank vows to “increase its holdings of Treasury securities and agency mortgage-backed securities at least at the current pace,” and Chairman Jerome Powell and Co. may stick to the same script at the next interest rate decision on November 5 as “forecasts from FOMC participants for economic growth this year have been revised up.”

It remains to be seen if the FOMC will adjust the forward guidance over the coming months as “the Committee would be prepared to adjust the stance of monetary policy as appropriate if risks emerge,” but the wait-and-see approach may keep current market trends in place as the Fed’s balance sheet climbs back above $7 trillion in August.

In turn, the tilt in retail sentiment may carry into the end of the month as the IG Client Sentiment report shows traders have been net-short EUR/USD since mid-May, with only 37.98% of the retail crowdcurrently net-long the pair as the ratio of traders short to long stands at 1.63 to 1. 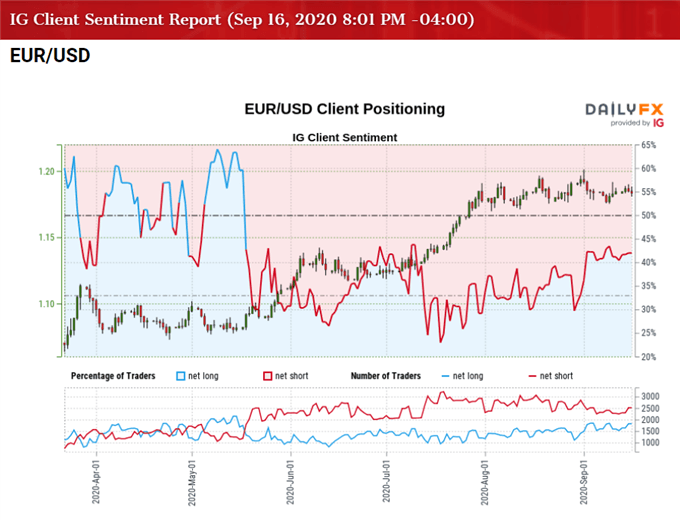 The number of traders net-long is 13.02% lower than yesterday and 14.22% lower from last week, while the number of traders net-short is 1.07% higher than yesterday and 3.29% higher from last week. The decline in net-long position could be a result of stop-loss orders getting triggered as EUR/USD trades to a fresh monthly low (1.1737), but the rise in net-short interest suggests the crowding behavior will persist even though the FOMC remains “committed to using its full range of tools to support the U.S. economy.”

With that said, the pullback from the yearly high (1.2011) may prove to be an exhaustion in the bullish price action rather than a change in trend as amid the ongoing skew in retail sentiment, but the Relative Strength Index (RSI) warns of a larger correction in EUR/USD as the indicator reverses ahead of trendline resistance to retain the downward trend carried over from the end of July.