EUR/USD largely retains the advance following the European Central Bank (ECB) meeting even though President Christine Lagarde warns that “the appreciation of the euro exercises a negative pressure on prices,” and the Relative Strength Index (RSI) may offer a bullish signal as the indicator threatens the downward trend carried over from the end of July.

EUR/USD may continue to retrace the decline from the 2020 high (1.2011) as the ECB appears to be in no rush to alter the path for monetary policy, and the updated staff projections indicate the central bank will rely on its current tools to support the Euro Area as “the incoming data since our last monetary policy meeting in July suggest a strong rebound in activity broadly in line with previous expectations.”

It seems as though the ECB willcontinue to endorse a wait-and-see approach at the next meeting on October 29 as the Governing Council stands “ready to adjust all of its instruments, as appropriate, to ensure that inflation moves towards its aim in a sustained manner,” but current market trends may keep EUR/USD afloat as President Lagarde emphasizes that “the European Central Bank does not target the exchange rate.”

In turn, the ECB may retain the current policy throughout the remainder of the year as the European Union (EU) plans to make the EUR 750B recovery fund available from 2021 to 2023, and it remains to be seen if the Federal Reserve interest rate decision will sway the near-term outlook for EUR/USD as Chairman Jerome Powell and Co. plan to “achieve inflation that averages 2 percent over time.”

As a result, the update to the Summary of Economic Projections (SEP) may drag on the US Dollar if the interest rate dot-plot reveals a downward revision in longer-run forecast for the Fed Funds rate, and current market trends may persist ahead of the US election as the Federal Open Market Committee (FOMC) shows little intentions of scaling back its emergency measures in 2020.

However, more of the same from the June meeting may spark a limited reaction as Fed officials discuss an outcome-based approach versus a calendar-based forward guidance for monetary policy, and EUR/USD may continue to track the monthly range as the decline from the 2020 high (1.2011) failed to produce a test of the August low (1.1696).

Nevertheless, the crowding behavior in EUR/USD looks poised to persist even though the exchange rate extends the rebound from the monthly low (1.1753) as retail traders have been net-short the pair since mid-May. 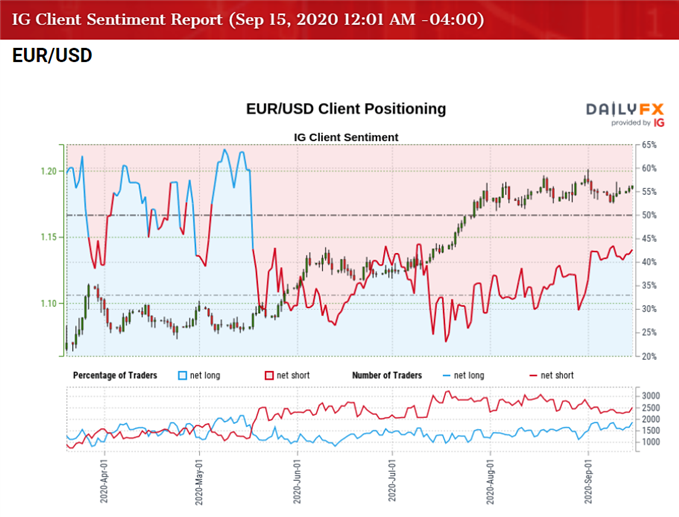 The recent rise in net-long position has helped to alleviate the tilt in retail sentiment as only 41.95% of traders were net-long EUR/USD at the end of last week, but the rise in net-short interest suggests the crowding behavior will persist even though the Euro largely retains the advance following the ECB meeting.

With that said, the ongoing skew in retail sentiment may continue to coincide with the bullish price actionin EUR/USD as it tags a fresh yearly high (1.2011) in September, and the Relative Strength Index (RSI) may foreshadow a further appreciation in the exchange rate as the indicator threatens the downward trend carried over from the end of July.