NZD/USD Outlook: Tilt in Retail Sentiment Persists Ahead of FOMC

NZD/USD struggles to extend the advance from the start of the week as consumer confidence in New Zealand weakens for three consecutive quarters, but the pullback from the yearly high (0.6789) may end up being an exhaustion in the bullish price action rather than a change in trend as the tilt in retail sentiment persists.

NZD/USD Outlook: Tilt in Retail Sentiment Persists Ahead of FOMC

NZD/USD slipped below the 0.67000 handle as the Westpac Consumer Confidence survey narrowed to 95.1 from 97.2 in the second quarter of 2020 to mark the lowest reading since 2008, and the exchange rate may continue to consolidate ahead of the Federal Reserve interest rate decision on September 16 as the central bank prepares to release the updated Summary of Economic Projections (SEP).

It remains to be seen if the new forecasts from Fed officials will reveal anything new as Chairman Jerome Powell and Co. discuss an outcome-based approach versus a calendar-based forward guidance for monetary policy, and more of the same from the June meeting may drag on NZD/USD as the central bank appears to be on track to retain the current stance throughout the remainder of the year.

However, projections for a lower neutral Fed Funds rate may prop up NZD/USD as the Federal Open Market Committee (FOMC) plans to “achieve inflation that averages 2 percent over time,” and current market trends may stay intact ahead of the US election as the central bank vows to “increase its holdings of Treasury securities and agency residential and commercial mortgage-backed securities at least at the current pace.”

At the same time, the crowding behavior in NZD/USD looks poised to persist even though the Reserve Bank of New Zealand (RBNZ) prepares a “package of additional monetary policy tools to support the economy” as retail trades have been net-short the pair since mid-June. 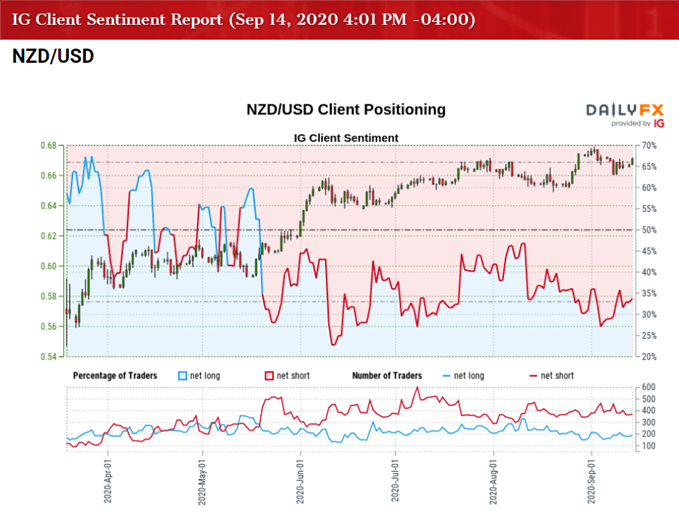 The rise in net-long position has helped to alleviate the tilt in retail sentiment as only 28.44% of traders were net-long NZD/USD last week, but the rise in net-short interest suggests the crowding behavior will persist even though the Fed’s balance sheet climbs back above $7 trillion in August.

With that said, the recent weakness in NZD/USD may prove to be an exhaustion in the bullish price action rather than a change in trend as the exchange rate trades to fresh yearly high (0.6789) in September, and current market trends may keep the exchange afloat ahead of the next RBNZ meeting on September 22 as the tilt in retail sentiment persists.