EUR/USD continues to track the monthly range following the kneejerk reaction to the Federal Reserve Economic Symposium, but the August low (1.1696) remains on the radar ahead of September as the Relative Strength Index (RSI) retains the downward trend established earlier this month.

The spike in EUR/USD volatility was short-lived as the update to the Statement on Longer-Run Goals and Monetary Policy Strategy showed small changes in the wording to the Fed’s mandate, with Chairman Jerome Powell insisting that “a longer-run inflation rate of 2 percent is most consistent with our mandate to promote both maximum employment and price stability.”

The prepared remarks by Chairman Powell states that the adjustments to the framework “reflects our view that a robust job market can be sustained without causing an outbreak of inflation,” with the central bank head going onto say that the Federal Open Market Committee (FOMC) will “seek to achieve inflation that averages 2 percent over time.”

In turn, Chairman Powell argues that “when inflation has been running below 2 percent, appropriate monetary policy will likely aim to achieve inflation moderately above 2 percent for some time,” and it seems as though the FOMC is in no rush to scale back its emergency measures even though the committee discusses an outcome-based approach versus a calendar-based forward guidance for monetary policy.

The developments coming out of Fed symposium suggest the FOMC will retain the current policy at the next interest rate decision on September 16, and current market themes may keep EUR/USD afloat as Chairman Powell and Co. vow to “increase its holdings of Treasury securities and agency residential and commercial mortgage-backed securities at least at the current pace.”

Nevertheless, the crowding behavior in the US Dollar looks poised to persist in September as retail traders have been net-short EUR/USD since mid-May, with the IG Client Sentiment report showing only 37.23% of traders net-long the pair as the ratio of traders short to long stands at 1.69 to 1. 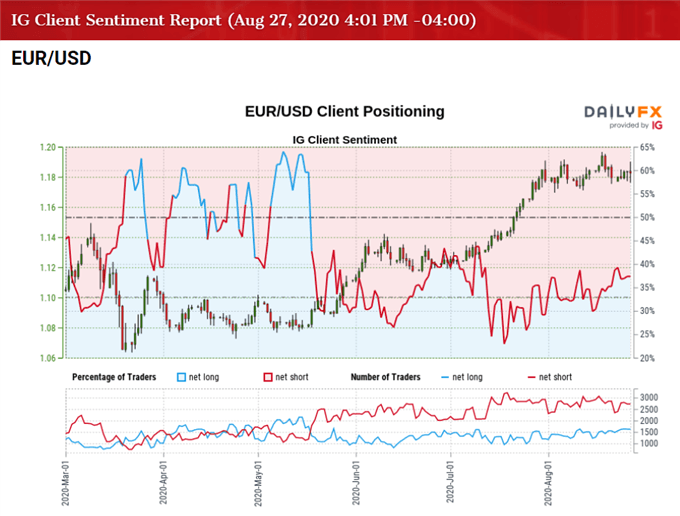 As a result, EUR/USD open interest is 13.76% lower from last week, but the tilt in retail sentiment may carry into the month ahead as the Federal Reserve shows little intentions of altering the path for monetary policy ahead of the US election in November.

With that said, current market conditions may keep EUR/USD afloat especially as the account of the European Central Bank (ECB) meeting highlights that the EUR 1.350 trillion envelope for the pandemic emergency purchase programme (PEPP) “should be considered a ceiling rather than a target,” but the pullback from the yearly high (1.1966) may turn into a more pronounced correction as the as the Relative Strength Index (RSI) retains the downward trend established earlier this month.