USD/CAD Under Pressure as BoC Highlights Limits of Monetary Policy

USD/CAD tags a fresh monthly low (1.3132) as Bank of Canada (BoC) Senior Deputy Governor Carolyn Wilkins highlights the “limits of monetary policy to solving all problems,” and the failed attempt to test the January low (1.2957) in August may prove to be an exhaustion in the bearish behavior rather than a change in trend as key market themes look poised to persist in September.

USD/CAD Under Pressure as BoC Highlights Limits of Monetary Policy

The comments suggests the BoC will rely on its current tools to support the Canadian economy as Wilkins warns that “central banks are likely to run out of conventional firepower if we see an economic downturn in a low-interest-rate world,” and it seems as though Governor Tiff Macklem and Co. are in no rush to alter the path for monetary policy as the central bank pledges to carry out “its large-scale asset purchase program at a pace of at least $5 billion per week.”

In turn, the BoC appears to be on track to retain the current policy at the next meeting on September 9 as Deputy Governor Lawrence Schembri insists that “our extraordinary policy actions have been firmly focused on attaining our inflation target, by supporting demand and employment throughout this difficult and protracted economic recovery,” and USD/CAD may continue to give back the advance from the start of the year as key market themes look poised to persist in September.

It remains to be seen if the Federal Reserve Economic Symposium will influence the near-term outlook for USD/CAD as the Federal Open Market Committee (FOMC) mulls an outcome-based approach versus a calendar-based forward guidance for monetary policy, but the event may largely indicate more of the same for the next interest rate decision on September 16 as the central bank extends its lending facilities through the end of the year, while the committee votes unanimously to push back “the expiration of the temporary U.S. Dollar liquidity swap lines through March 31, 2021.”

As a result, current market trends may carry into September as the BoC and FOMCstick to the status quo, and the crowding behavior in the US Dollar also looks poised to persist over the coming days as retail traders have been net-long USD/CAD since mid-May. 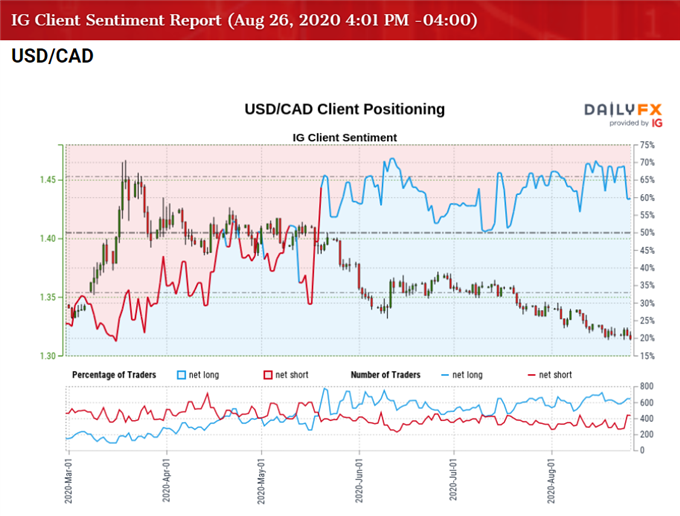 The decline in net-short position could be indicative of profit taking behavior as USD/CAD tags a fresh monthly low (1.3132), while the rise in net-long interest suggests the crowding behavior in the Greenback will carry into September even though the Fed’s balance sheet climbs back above $7 trillion in August.

With that said, the widening Fed’s balance sheet along with the crowding behavior in the US Dollar may keep USD/CAD under pressure, the failed attempt to test the January low (1.2957) in August may prove to be an exhaustion in the bearish behavior rather than a change in trend as key market themes look poised to persist in September.