AUD/USD trades near the yearly high (0.7276) ahead of the Federal Reserve Economic Symposium, and the Australian Dollar may continue to outperform its US counterpart if the event foreshadows more of the same for the next interest rate decision on September 16.

AUD/USD appears to be unfazed by data prints coming out of the Asian/Pacific region as it shows a limited reaction to the 19.6% rise in China’s Industrial Profits, but the series of higher highs and lows from earlier this week brings the 2019 high (0.7295) back on the radar as the less-than-expected decline in Australia’s Private Capital Expenditure is likely to keep the Reserve Bank of Australia (RBA) on the sidelines.

The gauge for business investment fell 5.9% in the second quarter of 2020 versus forecasts for an 8.2% decline, and the development may encourage the RBA to endorse a wait-and-see approach at the next meeting on September 1 as “the downturn in the first half of the year had been smaller than predicted.”

In turn, Governor Philp Lowe and Co. may stick to the yield-target program as the central bank continues to rule out a negative interest rate policy (NIRP) for Australia, and the different approach in managing monetary policy may keep AUD/USD afloat as the Federal Open Market Committee (FOMC) vows to “increase its holdings of Treasury securities and agency residential and commercial mortgage-backed securities at least at the current pace.”

It remains to be seen if the Fed Economic Symposium will bring an end to current market trends as the FOMC discusses an outcome-based approach versus a calendar-based forward guidance for monetary policy, and fresh remarks from Chairman Jerome Powell and Co. may spur a material shift in AUD/USD behavior if the central bank shows a greater willingness to scale back its emergency measures in 2021.

Nevertheless, the event may foreshadow more of the same for the September meeting as the FOMC votes unanimously to push back “the expiration of the temporary U.S. Dollar liquidity swap lines through March 31, 2021,” and the Australian Dollar may continue to appreciate against the Greenback as the crowding behavior in AUD/USD looks poised to persist over the coming days. 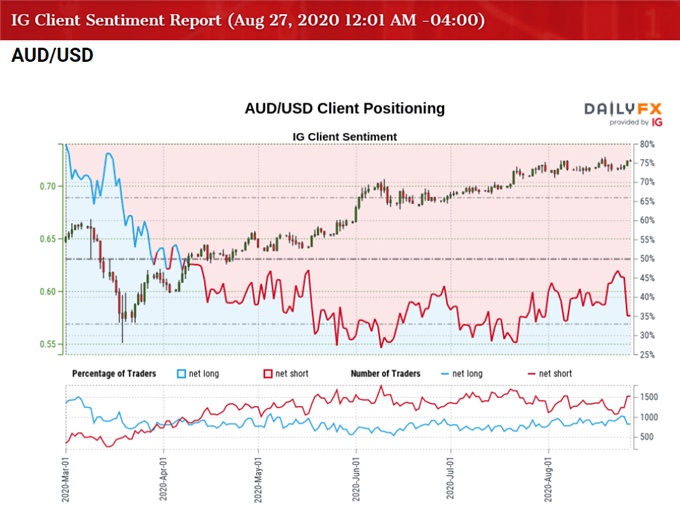 The recent decline in net-long position could be indicative of profit-taking behavior as AUD/USD trades near the yearly high (0.7276) ahead of the Fed symposium, while the rise in net-short interest suggests the tilt in retail sentiment will carry into the month ahead even though the Fed’s balance sheet climbs back above $7 trillion in August.

With that said, the 2019 high (0.7295) is back on the radar for AUD/USD as the recent weakness in the exchange rate may turn out to be an exhaustion in the bullish price action rather than a change in trend, but technical outlook is clouded with mixed signals as the Relative Strength Index (RSI) continues to deviate with price, with the oscillator snapping the upward trend established in July after failing to push into overbought territory.