EUR/USD preserves the range from earlier this month as it failed to test the August low (1.1696) during the previous week, and current market conditions may keep the exchange rate afloat as the Relative Strength Index (RSI) continues to track the upward trend established in March.

EUR/USD retraces the pullback from the 2020 high (1.1916) even though the RSI showed a textbook sell signal last week, and recent price action suggests the move below 70 was indicative of a potential exhaustion in the bullish behavior rather than a change in trend as the oscillator bounces back from trendline support.

It remains to be seen if the RSI will bounce along trendline support like the behavior seen in July as the crowding behavior in the US Dollar persists, and the account of the European Central Bank (ECB) meeting may do little to derail the appreciation in EUR/USD as the Governing Council appears to be in no rush to alter the course for monetary policy.

It seems as though the ECB will retain the current policy throughout the remainder of the year as fiscal authorities implement the prepare to deploy the EUR 750B recovery fund, and more of the same from President Christine Lagarde and Co. may keep EUR/USD afloat as the crowding behavior in the US Dollar carries into August. 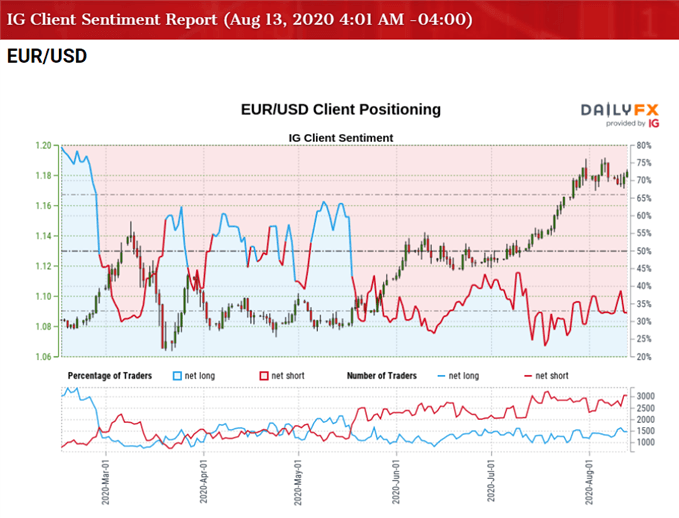 The recent decline in net-long position could be indicative of profit-taking behavior as EUR/USD approaches the 2020 high (1.1916), while the increase in net-short interest suggests the crowding behavior in the Greenback will persist even though the DXY indexhas plummeted more than 8% off the April highs.

With that said, current market conditions may EUR/USD afloat as the RSI continues to track the upward trend established in March, and the account of the ECB meeting may do little to derail the appreciation in the exchange rate if the central bank sticks to the same script.