USD/CAD Rate Rebound Undermined by Crowding Behavior in US Dollar

USD/CAD recovers after taking out the March low (1.3315) during the first week of August, but current market conditions may keep the exchange rate under pressure as the crowding behavior in the US Dollar persists.

USD/CAD Rate Rebound Undermined by Crowding Behavior in US Dollar

USD/CAD appears to making its way towards the monthly high (1.3451) following the limited reaction to Canada’s Employment report, and the rebound from the August low (1.3233) may gather pace as the Relative Strength Index (RSI) reverses course ahead of oversold territory.

However, USD/CAD may trade within a more defined range over the coming days as it struggles to extend the series of higher highs and lows from the previous week, and it remains to be seen if the 418.5K rise in Canada Employment will sway the monetary policy outlook as part-time positions account for 345.3K of the headline figure, with full-time jobs increasing 73.2K in July.

In turn, the Bank of Canada (BoC) may continue to utilize its balance sheet to support the Canadian economy as the central bank pledges to carry out “its large-scale asset purchase program at a pace of at least $5 billion per week,” and Governor Tiff Macklem and Co. may retain a dovish forward guidance at the next interest rate decision on September 9 as the “Bank is prepared to provide further monetary stimulus as needed.”

Until then, current market conditions may keep USD/CAD under pressure as the crowding behavior in the US Dollar carries into August even though the DXY Indextrades to fresh multi-year lows for the second consecutive week. 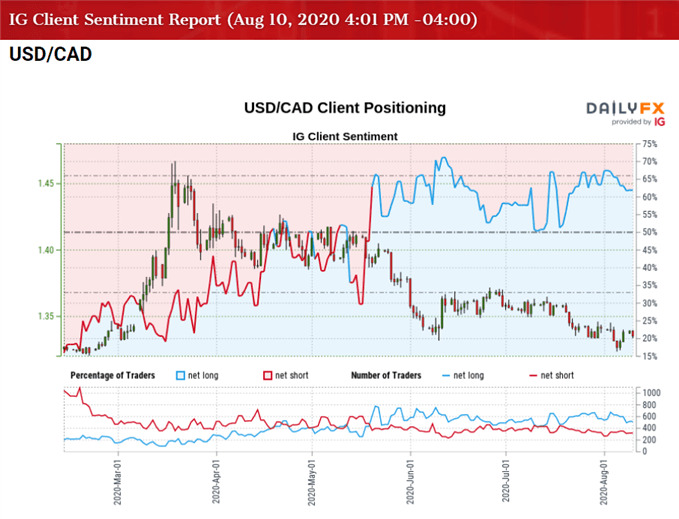 The decline in net-long interest suggests stop-loss orders were triggered last week as USD/CADtook out the March/June low (1.3315), while the rise in net-short position comes as the exchange rate struggles to extend the series of higher highs and lows from the previous week.

With that said, current market conditions may curb the recent rebound in USD/CAD as the crowding behavior in the US Dollar persists, and the exchange rate may trade within a more defined range over the coming days if the rebound from the August low (1.3233) fails to trigger a test of the monthly high (1.3451).