AUD/USD consolidates following the limited reaction to the US Non-Farm Payrolls (NFP) report, but the exchange rate may stay afloat ahead of the update to Australia’s Employment report as the crowding behavior in the US Dollar carries into August.

AUD/USD trades near the 2020 high (0.7243) even though the Relative Strength Index (RSI) snaps the upward trend established in July, and it remains to be seen if Australia’s Employment will influence the exchange rate as the economy is projected to add 40K jobs in July.

At the same time, the jobless rate is expected to increase to 7.8% from 7.4% in June as discouraged workers return to the labor force, and the participation rate may continue to recover from the lowest reading since 1997 as Treasurer Josh Frydenberg extends fiscal stimulus programs like the Jobkeeper Payment for six-months.

However, the previous update showed part-time jobs driving the headline figure as full-time positions fell for the fourth consecutive month, and the update may do little to sway the monetary policy outlook as the Reserve Bank of Australia (RBA) vows to “not increase the cash rate target until progress is being made towards full employment.”

It seems as though the RBA is no rush to shift gears as the Statement on Monetary Policy (SMP) reveals that “the yield target will remain in place until progress is being made towards the goals for full employment and inflation,” and Governor Philip Lowe and Co. may stick to the sidelines throughout the remainder of the year as “there was no need to adjust the mid-March package.”

In turn, the RBA may merely buy time at the next interest rate decision on September 1 as “the Board continues to view negative interest rates as being extraordinarily unlikely in Australia,” and the limited scope for additional monetary stimulus may provide a backstop for AUD/USD as the Federal Reserve pledges to “increase our holdings of Treasury and agency mortgage-backed securities at least at the current pace.”

Until then, current market conditions may keep AUD/USD afloat as the crowding behavior in the US Dollar carries into August even though the DXY Indextrades to fresh multi-year lows for the second consecutive week. 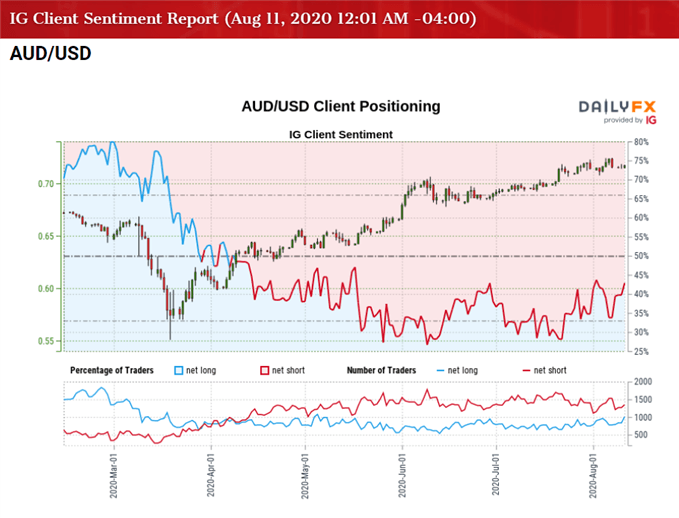 The rise in open interest suggests the crowding behavior in the US Dollar will persist even as AUD/USD trades near the 2020 high (0.7243), but the Relative Strength Index (RSI) appears to be deviating with price as the oscillator snaps the upward trend established in July after failing to push into overbought territory.