USD/CAD appears to reversing course following the failed attempt to test the June low (1.3315) as the Relative Strength Index (RSI) breaks out of the downward trend established in July.

USD/CAD seems to be stuck in a narrow range following the limited reaction to US Gross Domestic Product (GDP) report, and the exchange rate may continue to track sideways ahead of the Non-Farm Payrolls (NFP) report as the decline from the July high (1.3646) fails to trigger an extreme reading in the RSI like the behavior seen in June.

Nevertheless, current market conditions may continue to benefit the Canadian Dollar as the crowding behavior in the Greenback carries into August, and the IG Client Sentiment Report may continue to reflect a net-long US Dollar bias even though the DXY index plummets for sixth consecutive weeks. 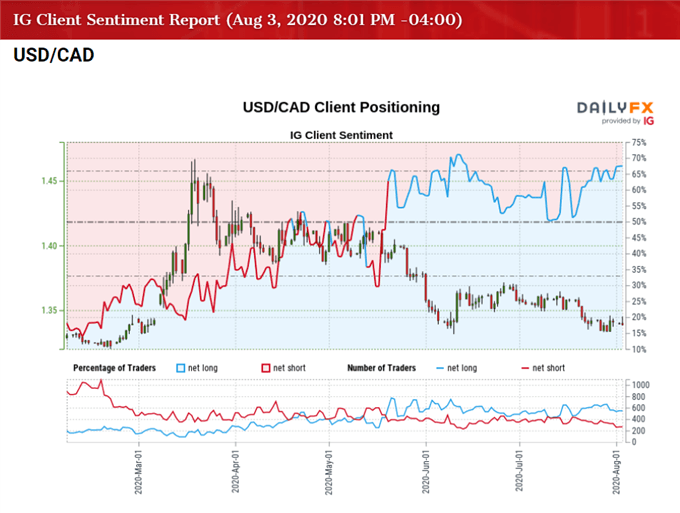 The rise in net-long interest takes shape as USD/CAD struggles to test the June low (1.3315), while the decline in net-short interest from the previous week could be attributed to profit-taking behavior as the exchange rate bounces back from the July low (1.3330). At the same time, the recent jump in net-short interest suggests FX traders are preparing for range bound conditions ahead of the NFP report as USD/CAD appears to be stuck in a narrow range.

With that said, it remains to be seen if fresh data prints coming out of the US and Canada will influence USD/CAD as the exchange rate trades within the June range, and the Relative Strength Index (RSI) may show the bearish momentum abating as it bounces back ahead of oversold territory and breaks out of the downward trend established in July.