NZD/USD continues to pullback from the July high (0.6716) ahead of New Zealand’s Employment report, which is expected to show the first contraction since 2019, and recent developments in the Relative Strength Index (RSI) suggest the bullish momentum will continue to abate following the string of failed attempt to push into overbought territory.

NZD/USD initiates a series of lower highs and lows after failing to test the January high (0.6733), and the update to New Zealand’s Employment report may drag on the exchange rate as job growth is expected to contract 2.0% in the second quarter of 2020.

At the same time, the jobless rate is projected to increase to 5.8% from 4.2% during the first three-months of 2020, and the development may force the Reserve Bank of New Zealand (RBNZ) to further support the economy as the central bank remains “prepared to provide additional stimulus as necessary.”

It seems as though the RBNZ will retain a dovish forward guidance at its next interest rate decision on August 12 as Deputy Governor Geoff Bascand warns that “it will take some time before we see a full recovery,” and the central bank may keep the door open to implement a negative interest rate policy (NIRP) as Chief Economist Yuong Ha declared that “we’ve given the banking system until the end of the year to get ready so that the option is there for the Monetary Policy Committee in a year’s time.”

Until then, NZD/USD may continue to consolidate as it initiates a series of lower highs and lows from the July high (0.6716), but current market conditions may keep the exchange rate afloat as the crowding behavior in the US Dollar carries into August. 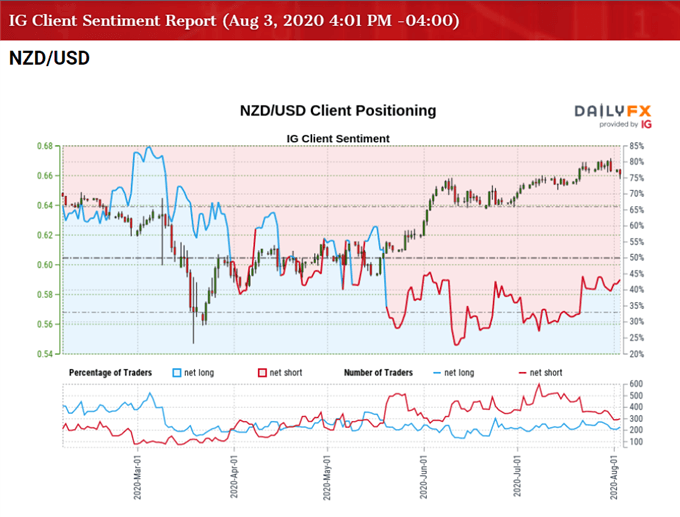 The decline in net-long positions could be indicative of profit-taking behavior as NZD/USD pulls back from the July high (0.6716), while the rise in net-short interest suggests the crowding behavior in the US Dollar will persist even though the DXY index plummets for sixth consecutive weeks.

With that said, fresh developments coming out of New Zealand may keep NZD/USD under pressure if the data prints fuel speculation for additional monetary support, and the Relative Strength Index (RSI) may show the bullish momentum unraveling over the coming days as it appears to be reversing course following the string of failed attempt to push into overbought territory.