USD/CAD tags a fresh monthly low (1.3330) ahead of the update to the US Gross Domestic Product (GDP) report, and current market conditions may keep the exchange rate under pressure as the Relative Strength Index (RSI) establishes a downward trend in July.

USD/CAD remains on the cusp on testing the June low (1.3315) following the Federal Reserve interest rate decision as the central bank sticks to the same script and retains a dovish forward guidance for monetary policy.

It seems as though the Federal Open Market Committee (FOMC) will continue to utilize its lending facilities along with its asset purchases to combat the economic shock from COVID-19 as Chairman Jerome Powell and Co. vow to “increase our holdings of Treasury and agency mortgage-backed securities at least at the current pace.”

Looking ahead, the update to the US GDP report may force the FOMC to retain the current policy throughout the remainder of the year as the economy faces the biggest contraction since the data series began in 1947, with the growth rate projected to tumble a record 34.1% in the second quarter following the 5.0% decline in the first three-months of 2020.

In turn, the Fed’s balance sheet looks poised to climb back above $7 trillion as the FOMC remains “committed to using our full range of tools to support the economy in this challenging time,” and current market conditions may carry into August as the crowding behavior in the US Dollar persists.

In fact, the IG Client Sentiment continues to reflect a net-long US Dollar bias, with retail traders net-long USD/CAD since mid-May even though the exchange rate filled the price gap from March. 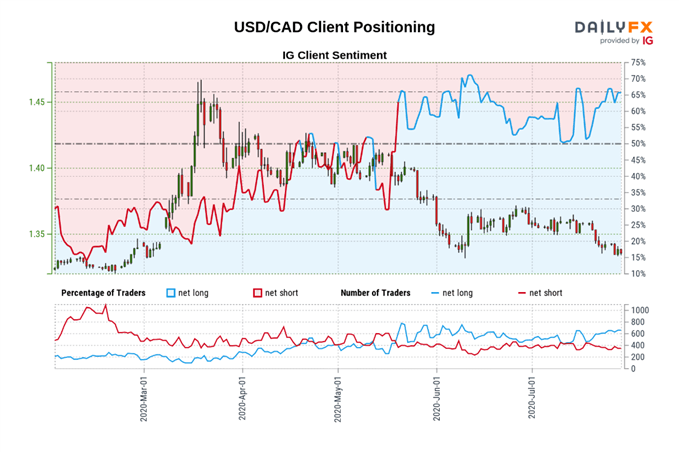 The rise in net-long positions suggests retail traders are looking for a potential reaction to the March low (1.3315) amid the behavior seen in June, while the decline in net-short interest could be attributed to profit-taking behavior as the exchange rate tags a fresh monthly low (1.3330) going into the end of July.

With that said, the June low (1.3315) remains on the radar for USD/CAD as the exchange rate extends the decline from earlier this month, and the Relative Strength Index (RSI) may show the bearish momentum gathering pace if the indicator registers an extreme reading like the behavior seen during the previous month.