EUR/USD appears to be holding near the 2020 high (1.1781) as the Federal Reserve extends the duration of its lending programs to December 31, and current market conditions may keep the exchange rate afloat as the Relative Strength Index (RSI) sits in overbought territory.

The technical outlook for EUR/USD remains constructive ahead of the Federal Open Market Committee (FOMC) interest rate decision as the bull flag formation highlighted the potential for a break above the March high (1.1495), with the RSI helping to validate the continuation pattern as the oscillator bounced along trendline support to preserve the upward trend from March.

It remains to be seen if the extreme RSI reading will carry into August as EUR/USD fails to extend the series of higher highs and lows from the previous week, but more of the same from the FOMC may push the exchange rate towards the September 2018 high (1.1815) as the central bank announces “an extension through December 31 of its lending facilities that were scheduled to expire on or around September 30.” 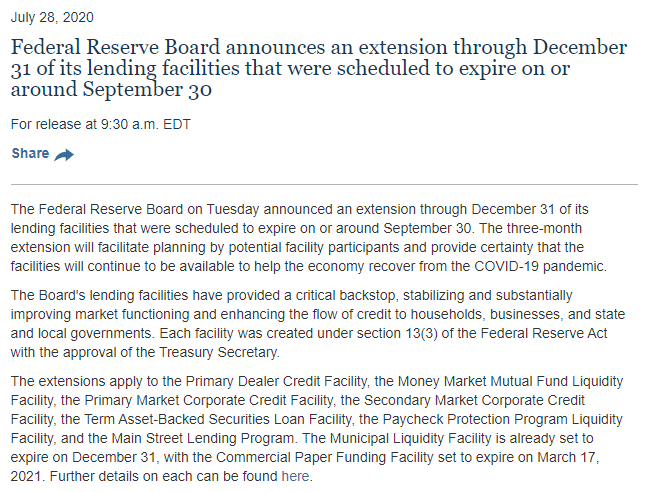 The timing of the press release suggests the FOMC will continue to utilize its lending facilities along with its asset purchases to combat the economic shock from COVID-19, and Chairman Jerome Powell and Co. may retain a dovish forward guidance over the coming months as the central bank vows to “increase its holdings of Treasury securities and agency MBS (Mortgage-Backed Security) and agency CMBS (Commercial Mortgage-Backed Security) at least at the current pace.”

In turn, the crowding behavior in the US Dollar may also persist in the month ahead as the IG Client Sentiment reportcontinues to show retail traders net-long USD/CHF, USD/CAD and USD/JPY, while the crowd remains net-short NZD/USD, GBP/USD, AUD/USD and EUR/USD. 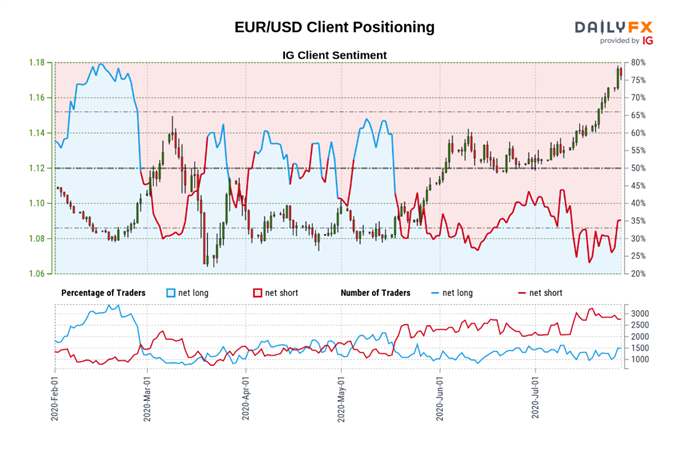 It seems as though the EUR/USD rally is fueling net-long interest as it clears the 2019 high (1.1570) in July, while the decline in net-short positions suggests stop-loss orders are being triggered as the exchange rate trades to a fresh yearly high (1.1781).

With that said, the crowding behavior in the US Dollar looks poised even though the Fed is expected to retain the current policy, and current market conditions may keep EUR/USD afloat as the RSI holds above 70.