AUD/USD trades near the 2020 high (0.7183) ahead of the update to Australia’s Consumer Price Index (CPI), which is anticipated to show the headline reading for inflation contracting for the first time since 1998, but current market conditions may keep the exchange rate afloat as the crowding behavior in the US Dollar persists.

AUD/USD clears the series of lower highs and lows from the previous week as the US Dollar weakens against all of its major counterparts, and it remains to be seen if the update to Australia’s CPI will influence the exchange rate as the headline reading for inflation is expected to slip to -0.4% from 2.2% per annum in the first quarter of 2020.

The sharp slowdown in price growth may do little to alter the course for monetary policy as the Reserve Bank of Australia (RBA) insists that the economic shock from COVID-19 “had been less severe than earlier expected,” and it seems as though the central bank will stick to the sidelines at the next meeting on August 4 as “members agreed that there was no need to adjust the package of measures in Australia in the current environment.”

In turn, the RBA may merely reiterate its pledge to “not increase the cash rate target until progress is made towards full employment,” and Governor Philip Lowe and Co. may retain the current policy throughout the remainder of the year as “the Bank had not purchased government bonds for some time.”

Looking ahead, the RBA may gradually alter the forward guidance over the coming months as Treasurer Josh Frydenberg extends fiscal stimulus programs like the Jobkeeper Payment for six-months, and the Australian Dollar may continue to outperform its US counterpart if the central bank prepares to remove the yield target later this year.

Until then, the crowding behavior in the US Dollar remains in focus as the DXY index continues to track the downward trend from March, while the IG Client Sentiment report shows retail traders have been net-short AUD/USD since April. 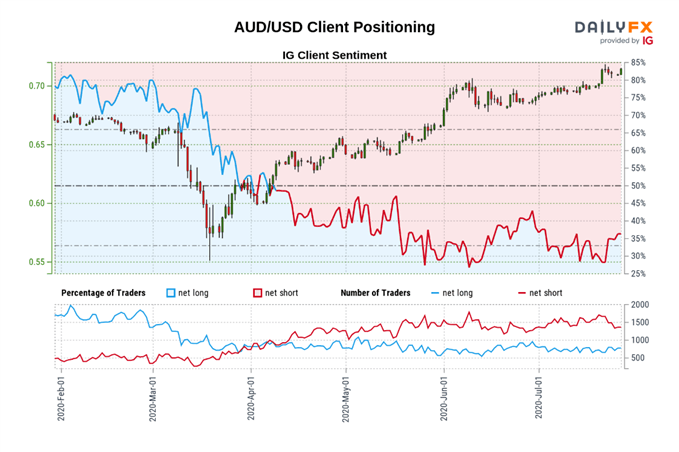 The rise in net-long interest indicates retail traders are gearing up for a further advance in AUD/USD as the exchange rate clears the June high (0.7064), while the decline in net-short positions suggests stop-loss orders are getting triggered as Aussie Dollar trades to fresh yearly highs.

With that said, current market conditions may keep AUD/USD afloat as the crowding behavior in the US Dollar persists, and the Relative Strength Index (RSI) may offer a bullish signal as the indicator flirts with overbought territory.