NZD/USD approaches the monthly high (0.6601) despite signs of crowding behavior in the US Dollar, but the Relative Strength Index (RSI) undermines the resilience in the New Zealand Dollar as the indicator appears to be diverging with price.

The New Zealand Dollar has outperformed most of its major counterparts in July as NZD/USD managed to clear the June high (0.6585), and the exchange rate may stay afloat over the coming days as the IG Client Sentiment report continues to reflect crowding behavior in the currency market, with retail traders net-short NZD/USD since May. 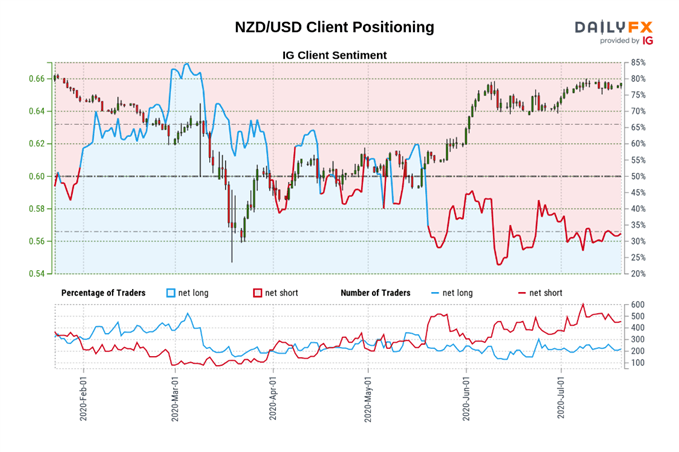 The drop on net-long exposure could be attributed to profit taking behavior as NZD/USD approaches the monthly high (0.6601), while the ongoing contraction in net-short interest suggests stop orders are getting triggered as the New Zealand Dollar continues to outperform its US counterpart.

It remains to be seen if the crowding behavior will persist as open interest for NZD/USD narrows 10.58% from the previous week, but current market conditions may keep the exchange rate afloat ahead of the Federal Reserve interest rate decision on July 29 as the central bank pledges to “increase its holdings of Treasury securities and agency MBS (Mortgage-Backed Security) and agency CMBS (Commercial Mortgage-Backed Security) at least at the current pace.”

Looking ahead, the Federal Open Market Committee (FOMC) appears to be on track to retain the current policy throughout the remainder of the year as US lawmakers try to nail out another fiscal stimulus program, and thecontraction in the Fed’s balance sheet may prove to be short lived as the central bank relies on its lending facilities as well as its asset purchases to support the US economy.

With that said, current conditions may keep NZD/USD afloat as the crowding behavior in the currency market persists, but recent developments in the Relative Strength Index (RSI) warn of a potential pullback in the exchange rate as the indicatorsnaps the upward trend from March and appears to be reversing course ahead of overbought territory.