The price of gold trades near the 2020 high ($1818) despite signs of crowding behavior in the US Dollar, but the precious metal may face a potential pullback as the advance from earlier this month fails to push the Relative Strength Index (RSI) into overbought territory.

The price of goldhas traded to fresh yearly highs during every single month so far in 2020, and the bullish behavior may persist throughout the second half of the year as the Federal Reserve vows to “increase its holdings of Treasury securities and agency MBS (Mortgage-Backed Security) and agency CMBS (Commercial Mortgage-Backed Security) at least at the current pace.”

It seems as though the Federal Open Market Committee (FOMC) will rely on its lending facilities along with its asset purchases to support the US economy even though the central bank remains “committed to using its full range of tools,” and it remains to be seen if Chairman Jerome Powell and Co. will deploy more unconventional tools as a growing number of Fed officials shows little interest in adopting a yield caps or targets (YCT) policy.

In turn, the FOMC may show a greater willingness to widen the size and scope of its asset purchase programs if the economy requires additional monetary support, and the recent contraction in the Fed’s balance sheet may prove to be short lived as the central bank appears to be on track to retain the current policy at the next interest rate decision on July 29.

The unprecedented efforts by the FOMC has dragged on the US Dollar, with the DXY index establishing a downward trend from the March high (102.99) as the greenback gives back the advance following the COVID-19 outbreak. 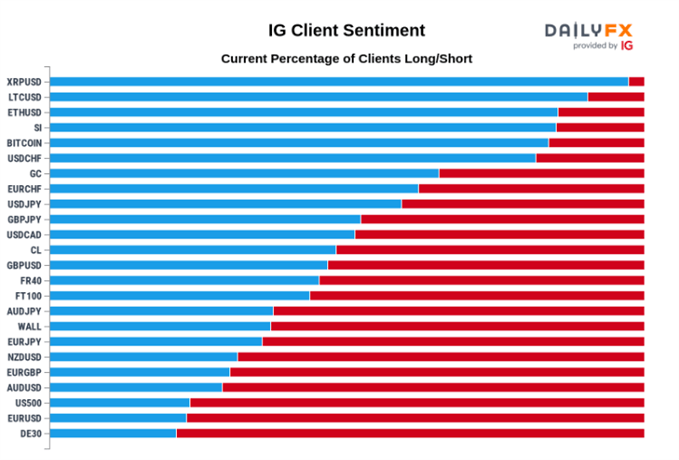 Nevertheless, the IG Client Sentiment report reflects crowding behavior in the US Dollar as the price of gold holds near the yearly high ($1818), with retail traders net-long USD/CHF, USD/JPY and USD/CAD, while the crowd is net-short GBP/USD, NZD/USD, AUD/USD and EUR/USD.

It remains to be seen if the net-long US Dollar exposure will persist ahead of the FOMC meeting as US lawmakers attempt to nail out another fiscal stimulus package over the coming days, but the low interest rate environment along with the ballooning central bank balance sheets may continue to act as a backstop for the price of gold as market participants look for an alternative to fiat-currencies.

However, recent developments in the Relative Strength Index (RSI) warn of a potential pullback in bullion as the indicator snaps the upward trend from June after failing to push into overbought territory.