AUD/USD trades near the monthly high monthly high (0.7001) ahead of the Reserve Bank of Australia (RBA) Minutes, and the statement may keep the exchange rate afloat as the “Bank has not purchased government bonds for some time.”

AUD/USD appears to be stuck in a narrow range following Australia’s Employment report, which showed the rebound in job growth largely driven by part-time positions (+249.0K), while full-time jobs narrowed (-38.1K) for the fourth consecutive month in June.

Nevertheless, a deeper look at the report revealed a larger-than expected uptick in the Participation Rate, with the gauge widening to 64.0% from a revised 62.7% in May amid forecasts for a 63.3% print. It remains to be seen if the update will influence the monetary policy outlook as discouraged workers return to the labor force, but the RBA Minutes are likely to mimic the policy statement from the July interest rate decision as the central bank pledges to “not increase the cash rate target until progress is being made towards full employment.” 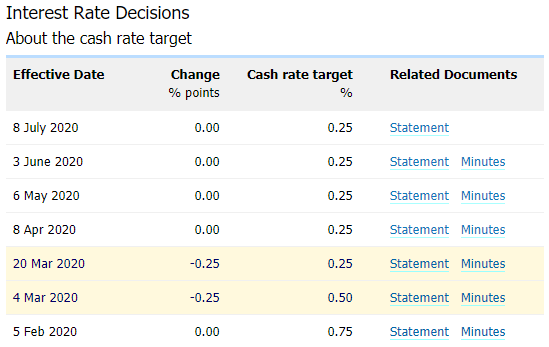 More of the same from the RBA may keep AUD/USD afloat as Deputy Governor Guy Debelle emphasizes that “if the three-year bond yield target is credible to the market, then the Reserve Bank does not need to purchase many bonds at all to achieve the target,” and the central bank may continue to carry out a wait-and-see approach as the economic shock from COVID-19 “has been less severe than earlier expected.”

In turn, the RBA may prepare to remove the yield target later this year, but Governor Philip Lowe and Co. appear to be in no rush to start normalizing monetary policy as fiscal programs like the Jobkeeper Paymentis set to expire on September 27.

With that said, the RBA may stick to the sidelines at the next rate decision on August 4, and the resilience in the Australian Dollar may persist in the month ahead as the “Bank has not purchased government bonds for some time.”

However, lack of momentum to test the 2020 high (0.7064) may generate range bound conditions in AUD/USD, with the exchange rate susceptible to a near-term correction as the advance from earlier this month fails to trigger an extreme reading in the Relative Strength Index (RSI).