EUR/USD clears the June high (1.1423) ahead of the European Central Bank (ECB) interest rate decision, and a bull flag formation appears to be unfolding as the Relative Strength Index (RSI) continues to track the bullish trend from earlier this year.

EUR/USD now appears to be on track to test the 2020 high (1.1495) asthe bull flag formation underscores a continuation pattern, and key developments coming out of the Euro Area may keep the exchange rate afloat as fiscal authorities convene for a special meeting between July 17-18 ‘to discuss the recovery plan to respond to the COVID-19 crisis.’

It remains to be seen if the ECB interest rate decision will influence the Euro exchange rate ahead of the EU meeting as the central bank is expected to move to the sidelines after expanding the Pandemic Emergency Purchase Programme (PEPP) by EUR600 billion in June.

The push for another round of fiscal stimulus may encourage the ECB to establish a wait-and-see approach even though the Governing Council stands “ready to adjust all of its instruments” as board member Yves Merschreveals that a European recovery fund “would reduce the burden on monetary policy and the need for further easing of the policy stance.” 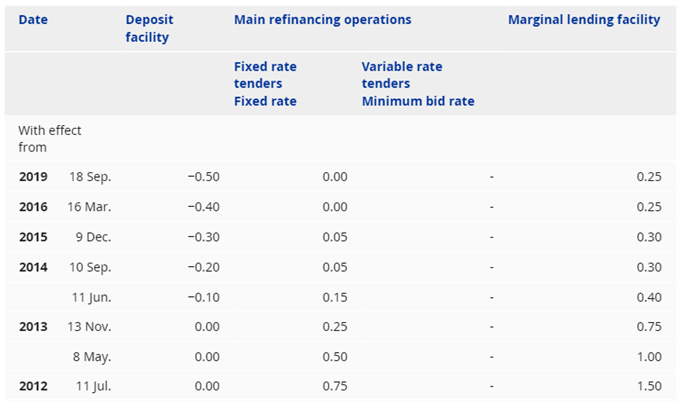 In turn, President Christine Lagarde and Co. may gradually alter the forward guidance as “euro area activity is expected to rebound in the third quarter,” and the ECB may stick to its non-standard tools to support the monetary union as the central bank shows little intent of pushing the main refinance rate, the benchmark for borrowing costs, into negative territory.

With that said, the reluctance to implement lower Euro Area interest rates may keep EUR/USD afloat as the ECB moves to the sidelines, and the exchange rate may stage another attempt to test the March high (1.1495) as a bull flag appears to be unfolding, while the Relative Strength Index (RSI) continues to track the bullish trend from March.