NZD/USD managed to clear the June high (0.6585) earlier this month as the US Dollar weakened against most of its major counterparts, but the Relative Strength Index (RSI) appears to be diverging with price as the indicator flops ahead of overbought territory.

NZD/USD appears to be making a run at the monthly high (0.6601) as it attempts to retrace the decline from earlier this week, and the New Zealand Dollar may continue to outperform against its US counterpart as the IG Client Sentiment report continues to reflect crowding behavior in the currency market, with retail traders net-short NZD/USD since May. 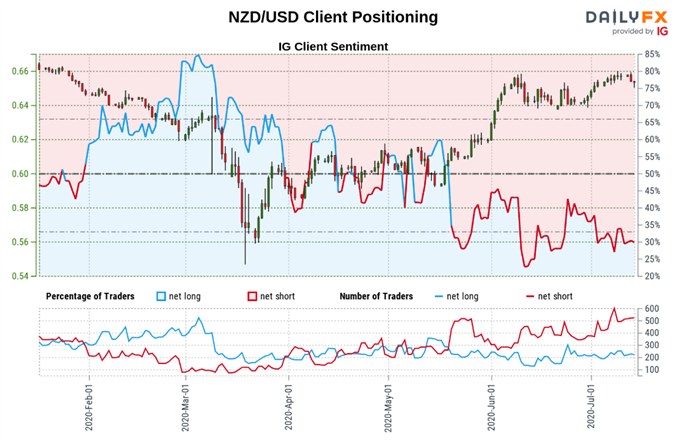 The recent decline in net-long exposure could be attributed to profit taking behavior as NZD/USD consolidates after clearing June high (0.6585), while the contraction in net-short interest suggests stop orders are getting triggered as the New Zealand Dollar continues to outperform its US counterpart.

It remains to be seen if the crowding behavior in the currency market will persist as open interest narrows 9.75% from the previous week, but current market conditions may keep NZD/USD afloat ahead of the next Reserve Bank of New Zealand (RBNZ) interest rate decision on August 12 as central bank appears to be on track to keep the official cash rate at the record low of 0.25%.

Looking ahead, it seems as though the RBNZ is in no rush to provide additional monetary support after expanding the Large Scale Asset Purchase (LSAP) program in May, and the central bank may carry out a wait-and-see approach over the coming months as “fiscal policy measures are expected to support economic activity.”

In turn, the RBNZ may unveil a less dovish forward guidance as Governor Adrian Orr and Co. pledge to “outline the outlook for the LSAPprogramme and our readiness to deploy alternative monetary policy tools in our August Statement,” and the recovery in the New Zealand Dollar may continue to outperform its US counterpart in the second half of 2020 if the central bank tames speculation for additional monetary support.

However, the RBNZ may keep the door open to implement a negative interest rate policy (NIRP) as Chief Economist Yuong Ha reveals that “we’ve given the banking system until the end of the year to get ready so that the option is there for the Monetary Policy Committee in a year’s time,” and bets for a NIRP in New Zealand may produce headwinds for NZD/USD as Federal Reserve Chairman Jerome Powell rules out negative US interest rates.

With that said, current market conditions may keep NZD/USD afloat as the crowding behavior in the current market persists, but recent developments in the Relative Strength Index (RSI) warn of a potential pullback in the exchange rate as the indicatorsnaps the upward trend from March and flops ahead of overbought territory.