USD/CAD is little changed from the start of the month amid the limited reaction to the Bank of Canada’s (BoC) Business Outlook survey, and the exchange rate may continue to consolidate as it snaps the ascending channel formation carried over from the previous month.

USD/CAD appears to be stuck in a narrow range even though the BoC Business Outlook survey falls -7.0 from a revised -0.5 in the first quarter to mark the lowest reading since 2009, and it remains to be seen if the update to Canada’s Employment report will influence the exchange rate as the economy is expected to add 700K jobs in June.

Stronger job growth along with a decline in the Unemployment Rate may trigger a bullish reaction in he Canadian Dollar as it saps bets for additional monetary support, and the ongoing improvement in the labor market may keep the Bank of Canada (BoC) on the sidelines as “the Bank is reducing the frequency of its term repo operations to once per week, and its program to purchase bankers’ acceptances to bi-weekly operations.” 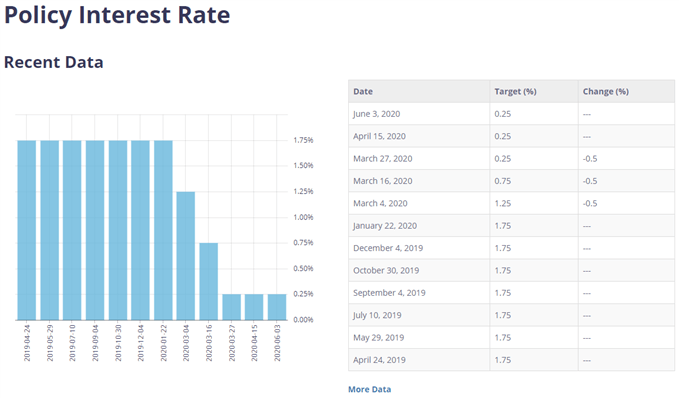 In turn, the BoC looks poised to retain the current policy at the next meeting on July 15 as officials “expect growth to resume in the third quarter,” and it seems as though the central bank will carry out a wait-and-see approach over the coming months as “any further policy actions would be calibrated to provide the necessary degree of monetary policy accommodation required to achieve the inflation target.”

With that said, the update to the Monetary Policy Report (MPR) may reveal a less dovish forward guidance as “the Bank’s focus will shift to supporting the resumption of growth in output and employment,”and key developments coming out of Canada may influence the near-term outlook for USD/CAD if the BoC tames speculation for additional monetary support.

However, the BoC may stick to the same script as Governor Tiff Macklem rules out a V-shape recovery, and more of the same from the central bank may drag on the Canadian Dollar as “the Bank maintains its commitment to continue large-scale asset purchases until the economic recovery is well underway.”

Until then, USD/CAD may continue to consolidate as it snaps the ascending channel formation carried over from the previous month, and exchange rate may face range bound conditions ahead of Canada’s Employment report as the rebound from earlier this week appears to be sputtering ahead of the monthly high (1.3624).