The Australian Dollar continued to outperform its US counterpart in June as AUD/USD climbed to a fresh yearly high (0.7064), but it remains to be seen if the resilience will carry into July as the Relative Strength Index (RSI) snaps the bullish trend from earlier this year.

AUD/USDretains the advance from the June low (0.6648) even though Reserve Bank of Australia (RBA) Governor Philip Lowe jawbones the Australian Dollar as the central bank continues to tame speculation for additional monetary support.

A recent speech by RBA Deputy GovernorGuy Debelle suggests the central bank will carry out a wait-and-see approach throughout the second half of 2020 as “the Australian economy has turned out to be somewhat better in the June quarter than feared.”

Debelle emphasized that “the Board expects that the cash rate will remain at its current low level for some years,” but went onto say that “if the three-year bond yield target is credible to the market, then the Reserve Bank does not need to purchase many bonds at all to achieve the target.” 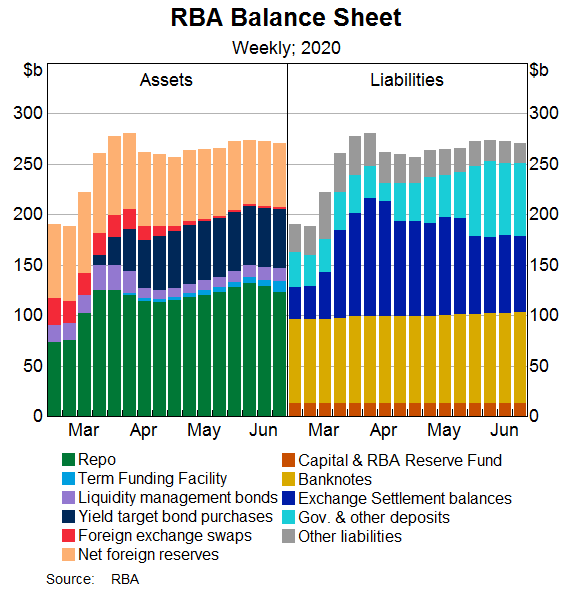 In turn, Debelle revealed that “the RBA has not needed to buy any bonds since early May,” and the central bank may gradually adjust the forward guidance over the coming months as “recent data indicate that the outcomes in the Australian economy have been better than earlier feared.”

Nevertheless, Debelle warns that the COVID-19 pandemic “will have a long-lived impact that will require considerable policy support for quite some time to come,” and it seems as though the RBA will rely on fiscal authorities to further support the economy as “the objective of the monetary policy response is to support the economy by keeping borrowing costs low and credit available for households and businesses, complementing the necessary and large fiscal policy stimulus.”

As a result, RBA board member Ian Harper insists that fiscal authorities should set up a “tapering arrangement” as programs like the Jobkeeper Paymentis set to expire on September 27, but the government may continue to show little interest in extending the stimulus programs as Standard and Poor’s and Fitch Ratings cut Australia’s credit rating outlook to ‘negative’ from ‘stable.’

With that said, the RBA may come under pressure to deploy more unconventional tools as the official cash rate sits at the effective lower bound (ELB), but the central bank looks poised to retain the status quo at the next interest rate decision on July 7as officials vow to “not increase the cash rate target until progress is made towards full employment.”

At the same time, a growing number of RBA officials may attempt to jawbone the local currency as Governor Lowe insists that a lower Australian Dollar would help to lift inflation, but the resilience in AUD/USD may persist in July if the central bank continues to tame speculation for additional monetary support.

However, recent developments in the Relative Strength Index (RSI) warn of a potential shift inAUD/USD behavior as the indicator falls back from overbought territory and snaps the bullish trend from earlier this year.