NZD/USD consolidates following the bearish reaction to the Reserve Bank of New Zealand (RBNZ) interest rate decision, but the exchange rate may struggle to preserve the advance from the start of the month as the Relative Strength Index (RSI) snaps the upward trend carried over from March.

The range bound price action in NZD/USD appears to be generating profit-taking behavior as the decline from the previous week stalls ahead of the June low (0.6185), with the IG Client Sentiment report revealing a drop in net-short interest. 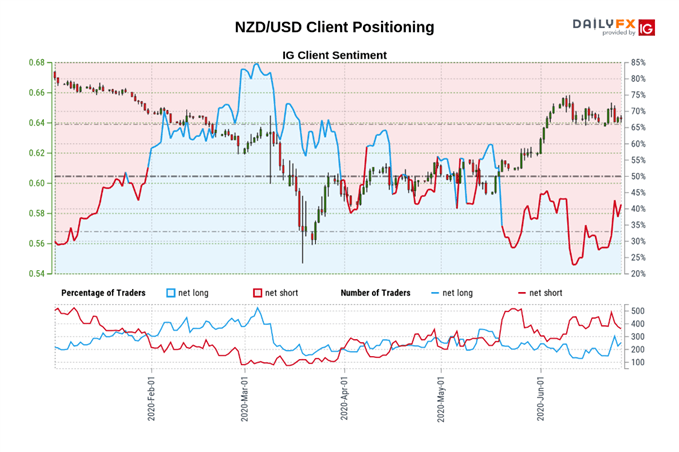 The recent update shows the number of traders net-short NZD/USD is 5.19% lower than yesterday and 14.74% lower from last week as the exchange rate consolidates following the RBNZ meeting, but only 38.91% of retail traders are net-long NZD/USD, with the ratio of traders short to long at 1.57 to 1.

Even though the number of traders net-long NZD/USD is 9.80% lower than yesterday, net-long interest stands 47.33% higher from last week, and it remains to be seen if a growing number currency traders will attempt to trade the range bound price action as market participation tends to wane going into the end of month/quarter.

In turn, market participation may remain weak ahead of the upcoming holiday weekend in the US, and thin market conditions may generate choppy price action in NZD/USD as the RBNZ keeps the official cash rate (OCR) at the record low of 0.25% in June.

Nevertheless, the RBNZ may continue to endorse a dovish forward guidance in the second half of the year as the central bank pledges to “outline the outlook for the LSAP (Large Scale Asset Purchase) programme and our readiness to deploy alternative monetary policy tools in our August Statement,” and Adrian Orr and Co. may show a greater willingness to further utilize its balance sheet as “the Committee agreed that it is not yet clear whether the monetary stimulus delivered to date is sufficient to meet its mandate.”

At the same time, the RBNZ may keep the door open to implement a negative interest rate policy (NIRP) as Chief Economist Yuong Ha reveals that “we’ve given the banking system until the end of the year to get ready so that the option is there for the Monetary Policy Committee in a year’s time,” and speculation for additional monetary support casts a bearish outlook for NZD/USD as Federal Reserve Chairman Jerome Powell rules out negative US interest rates.

With that said, current market conditions may keep NZD/USD within a narrow range, but the exchange rate may struggle to preserve the advance from earlier this month as the Relative Strength Index (RSI) snaps the upward trend carried over from March and reflects a potential shift in market behavior.