NZD/USD continues to pull back from the monthly high (0.6585) following the Federal Reserve interest rate decision, and the Relative Strength Index (RSI) may highlight a potential shift in market behavior as the oscillator offers a textbook sell signal and appears to be on track to threaten the bullish formation from March.

NZD/USD carves a fresh series of lower highs and lows as the Federal Open Market Committee (FOMC) insists that “some indicators suggest a stabilization or even a modest rebound in some segments of the economy,”and the central bank may continue to scale back the pace of its asset purchases as “market functioning has improved since the strains experienced in March.”

It seems as though the FOMC is in no rush to deploy more non-standard measures after expanding the scope of the Main Street Lending Program“to allow more small and medium-sized businesses to be able to receive support,” and the committee may carry out a wait-and-see approach over the coming months as Chairman Jerome Powell and Co. pledge to “evaluate our monetary policy stance and communications as more information about the trajectory of the economy becomes available.”

The Reserve Bank of New Zealand (RBNZ) may follow a similar approach after expanding the Large Scale Asset Purchase (LSAP) programin May to NZ$60 billion from NZ$33 billion, and the central bank may merely attempt to buy time at the next meeting on June 24 as the New Zealand Institute of Economic Research (NZIER) emphasizes that “the growth outlook for the New Zealand economy is V-shaped, with a sharp decline in activity forecast for the coming year, followed by a strong rebound.” 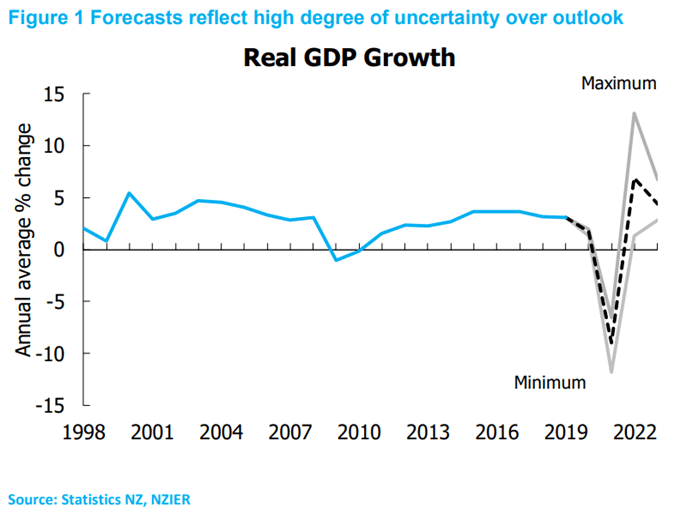 The NZIER goes onto say that the “V-shaped forecast of economic growth is reflected across many of the activity measures, including household spending, business investment, and export demand,” and the RBNZ may adjust the forward guidance over the coming months as officials expect “to see retail interest rates decline further as lower wholesale borrowing costs are passed through to retail customers.”

However, it remains to be seen if Governor Adrian Orr and Co. will implement a negative interest rate policy (NIRP) in 2021 as Chief Economist Yuong Ha reveals that “we’ve given the banking system until the end of the year to get ready so that the option is there for the Monetary Policy Committee in a year’s time,” and speculation for a NIRP in New Zealand may drag on NZD/USD later this year as Federal Reserve Chairman Powell tames bets for negative US interest rates.

At the same time, recent price action warns of a potential shift in NZD/USD behavior as the Relative Strength Index (RSI) offers a textbook sell signal and appears to be on track to threaten the bullish formation from March.