The price of gold trades near the monthly high ($1746) as Federal Reserve Chairman Jerome Powell prepares to testify in front of Congress, and the dovish forward guidance may keep the precious metal afloat as the central bank pledges to “increase our holdings of Treasury and agency mortgage-backed securities over coming months at least at the current pace.”

The price of gold has traded to fresh yearly highs during every single month so far in 2020, and the precious metal may continue to exhibit a bullish behavior in June as the pullback from the yearly high ($1765) reverses ahead of the May low ($1670).

However, bullion appears to be stuck in a narrow range following the reaction to the Federal Open Market Committee (FOMC) interest rate decision, and it remains to be seen if Chairman Powell will reveal anything new in front of US lawmakers as Fed officials pledge to “evaluate our monetary policy stance and communications as more information about the trajectory of the economy becomes available.”

Chairman Powell may strike a less dovish tone as the update to the Summary of Economic Projections (SEP) show “a general expectation of an economic recovery beginning in the second half of this year,” and it seems as though the FOMC is in no rush to deploy more non-standard measures after expanding the scope of the Main Street Lending Program “to allow more small and medium-sized businesses to be able to receive support.” 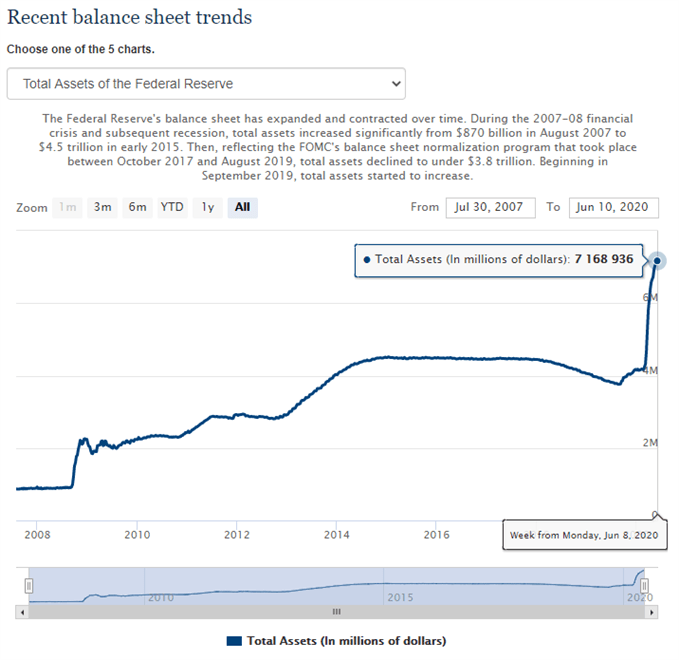 In turn, Chairman Powell may tame speculation for a yield-curve control program as “whether such an approach would usefully complement our main tools remains an open question,” and the central bank head may emphasize that “when the time comes, after the crisis has passed, we will put these emergency tools back in the toolbox” as the balance sheet climbs above $7.1 trillion in June.

Looking ahead, the FOMC may alter the forward guidance at the next interest rate decision on July 29 as “some indicators suggest a stabilization or even a modest rebound in some segments of the economy,” but the low interest rate environment along with the ballooning central bank balance sheets may continue to act as a backstop for the price of goldas marketparticipants look for an alternative to fiat-currencies.

With that said, the semi-annual Fed testimony may generate a similar reaction to the FOMC interest rate decision, and the price for bullion may continue to exhibit a bullish behavior in June as the pullback from the yearly high ($1765) fails to produce a break of the May low ($1670).