AUD/USD trades to a fresh monthly high following the Reserve Bank of Australia (RBA) interest rate decision, and the exchange rate may attempt to test the 2020 high (0.7032) as the Relative Strength Index (RSI) sits in overbought territory.

The Australian Dollar has outperformed against all of its major counterparts in May, and the bullish behavior may persist in June as the RBA keeps the official cash rate (OCR) at the record low of 0.25% and tames speculation for additional monetary support. 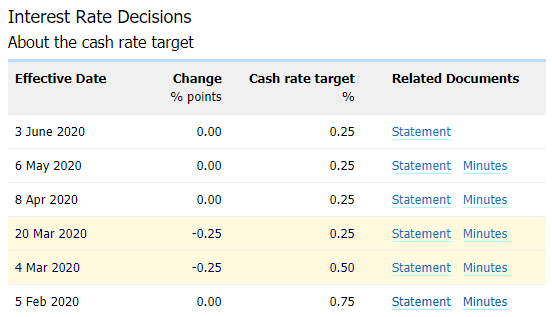 It seems as though the RBA will continue to alter the forward guidance even though the update to the 1Q Gross Domestic Product (GDP) report signals an end to Australia’s record period of economic growth as the central bank insists that “it is possible that the depth of the downturn will be less than earlier expected.”

The comments suggest the RBA has yet to rule out a V-shaped recovery as “the substantial, coordinated and unprecedented easing of fiscal and monetary policy in Australia is helping the economy through this difficult period,” and Governor Philip Lowe and Co. appear to be on track to carry out a wait-and-see approach throughout the remainder of the year as “the Board will not increase the cash rate target until progress is being made towards full employment and it is confident that inflation will be sustainably within the 2–3 per cent target band.”

However, the RBA points out that “it is likely that this fiscal and monetary support will be required for some time” amid the gradual process in reopening the Australian economy, and the threat of a protracted recovery may put pressure on the central bank to deploy more non-standard measures as stimulus programs like the Jobkeeper Payment is set to expire on September 27.

In turn, the Australian Dollar is likely to face headwinds if the RBA reverts back to a dovish forward guidance, but current market conditions may keep AUD/USD afloat as the Federal Reserve prepares to have the Municipal Liquidity Facility along with the Main Street Lending Program up and running in June.

With that said, the Australian Dollar may continue to outperform its major counterparts in June as the RBA continues to abandon the dovish forward guidance for monetary policy, and the break above the February high (0.6774) may spur a run at the 2020 high (0.7032) as the Relative Strength Index (RSI) sits in overbought territory.