The price of gold has traded to fresh yearly highs during every single month so far in 2020, and the bullish behavior may persist in June as the Relative Strength Index (RSI) breaks out of a negative slope.

The price of gold appears to have reversed course ahead of the May low ($1670) as it extends the series of higher highs and lows from the previous week, and the precious metal stage another attempt to test the 2012 high ($1796) as the Federal Reserve prepares to have the Municipal Liquidity Facility along with the Main Street Lending Program up and running in June. 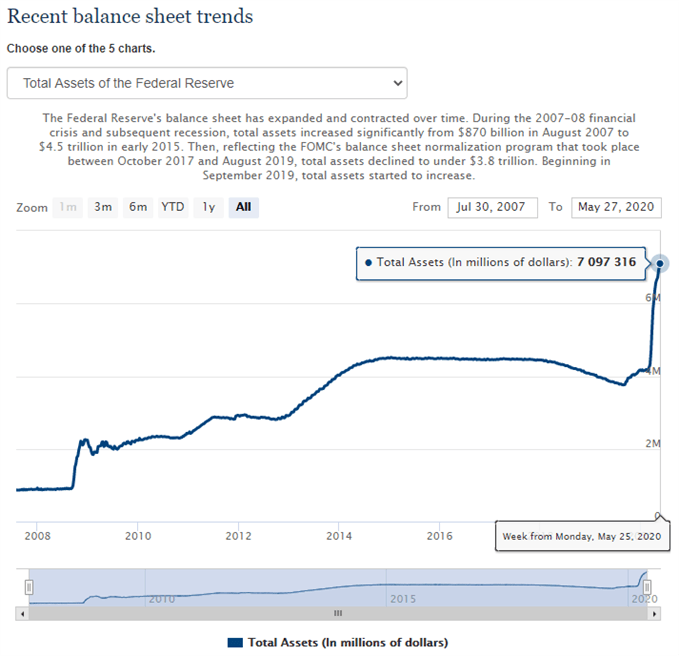 The new set of non-standard measures may push the Federal Open Market Committee (FOMC) to the sidelines as the balance sheet climbs above $7 trillion in May, and the central bank may carry out a wait-and-see approach over the coming months as ChairmanJerome Powelltames speculation for a negative interest rate policy (NIRP).

It remains to be seen if the FOMC will deploy more unconventional tools over the coming months as Fed officials express mixed views regarding the US economy, and the committee may continue to endorse a dovish forward guidance at the next interest rate decision on June 10 amid the threat of a protracted recovery.

In turn, the FOMC may largely reiterate its committed in “using its full range of tools to support the U.S. economy in this challenging time,” and the low interest rate environment along with the ballooning central bank balance sheets may continue to act as a backstop for goldas marketparticipants look for an alternative to fiat-currencies.

With that said, the price for gold may exhibit a bullish behavior in June as it trades to fresh yearly highs during every single month so far in 2020, and the precious metal may stage another attempt to test the 2012 high ($1796) as the Relative Strength Index (RSI) breaks out of a bearish formation.