USD/CAD holds near the monthly low (1.3728) after snapping the range bound price action carried over from April, but Canada’s 1Q Gross Domestic Product (GDP) report may undermine the recent decline in the exchange rate as the update is expected to show the biggest contraction since the data series began in 1961.

USD/CAD appears to be stuck in a narrow range after clearing the April low (1.3850), but fresh data prints coming out of Canada may influence the exchange rate as Bank of Canada (BoC) Governor Stephen Poloz tells Canadian lawmakers that the central bank is “prepared to augment the scale of any of its programs if needed.”

The update to Canada’s GDP report is anticipated to show a 10% decline in the growth rate following the 0.3% expansion during the last three-months of 2019, and signs of a looming recession may put pressure on the BoC to further support the economy as the central bank pledges to “create the best possible foundation for the recovery period.”

It remains to be seen if the BOC under Tiff Macklem will deploy more unconventional tools over the coming months as Governor Poloz states that “the Bank has reduced its policy interest rate by a total of 150 basis points to 0.25 percent—the effective lower bound,” and the central bank may become increasingly reliant on its balance sheet as ““the economy will need significant monetary stimulus in the rebuilding stage.” 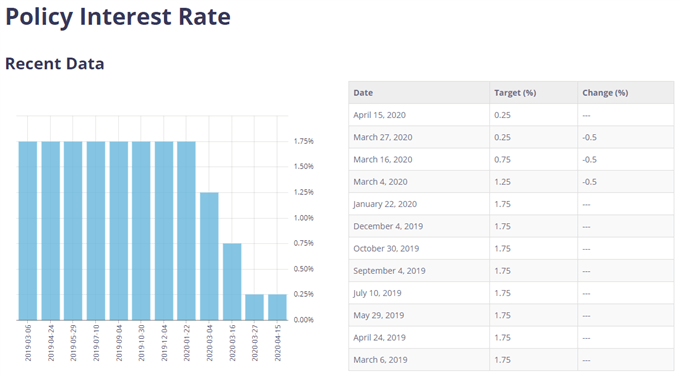 In turn, the BoC may carry out a wait-and-see approach over the coming months as the central bank prepares to launch the Provincial Bond Purchase Program along with the Corporate Bond Purchase Program, but the Governing Council may continue to endorse a dovish forward guidance at the next meeting on June 3 as “there will be lessons to learn from how supply chains evolve” following COVID-19.

With that said, the Canadian Dollar may face headwinds throughout 2020 as the BoC keeps the door open to implement more non-standard measures, and the broader outlook for USD/CAD remains constructive as the exchange rate breaks out of the descending channel from March.

However, the pullback from the yearly high (1.4667) may continue to evolve amid the break of the April low (1.3850), and the exchange rate may exhibit a more bearish behavior in June as it carves a downward trending channel.