NZD/USD fails to test the April high (0.6176) ahead of the Reserve Bank of New Zealand (RBNZ) interest rate decision, and fresh remarks from Governor Adrian Orr and Co. may drag on the New Zealand Dollar if the central bank endorses a dovish forward guidance for monetary policy.

NZD/USD continues to track the range bound price action from the last week of April as it pulls back from a fresh monthly high (0.6156), and the exchange rate may continue to consolidate over the next 24 hours of trading as the RBNZ is widely expected to keep the official cash rate (OCR) at the record low of 0.25%. 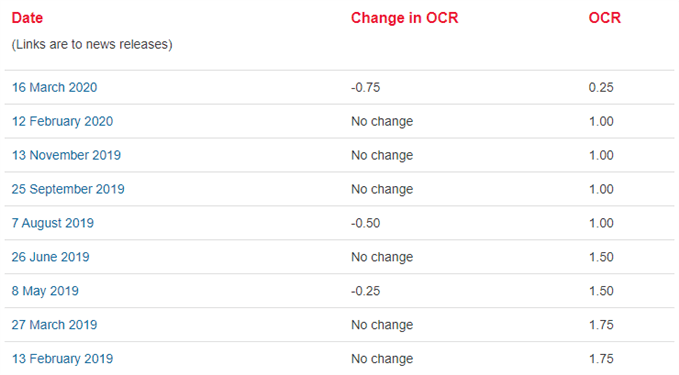 The RBNZ is likely to reiterate its pledge to “keep the OCR at this level for at least 12 months” as the central bank lays out a set of projections that “ranges from an estimated 4 percent reduction in GDP under alert level 1 up to 37 percent of GDP under level 4,” and Governor Orr and Co. may carry out a wait-and-see approach over the coming months as Prime Minister Jacinda Ardern rolls back the lockdown laws.

It remains to be seen if the unprecedented efforts taken by fiscal as well as monetary authorities will spur a V-shaped recovery as the travel restrictions remain in place, and the RBNZ may largely endorse a dovish forward guidance for monetary policy as Governor Orr remains reluctant to rule out a negative interest rate policy (NIRP).

In turn the RBNZ may continue to push monetary policy into uncharted territory as the central bank expands the Large Scale Asset Purchase programme (LSAP) to include NZ$ 3B of Local Government Funding Agency (LGFA) debt, and the Monetary Policy Committee (MPC) may implement more non-standard measures over the coming months as Governor Orr insists that “the Reserve Bank can keep monetary support going for as long as necessary through QE and other tools.”

With that said, the RBNZ interest rate decision may drag on the New Zealand Dollar if the central bank shows a greater willingness to deploy more unconventional tools over the coming months, and NZD/USD may exhibit a more bearish behavior as the exchange rate appears to be reversing course ahead of the April high (0.6176).