AUD/USD appears to be stuck in a narrow range as the Reserve Bank of Australia (RBA) keeps the official cash rate (OCR) at the record low of 0.25%, but the failed attempt to test the March high (0.6685) warns of a potential shift in market behavior as the exchange rate snaps the upward trending channel carried over from the previous month.

AUD/USD is little changed from earlier this week as the RBA offers little guidance ahead of its quarterly Statement on Monetary Policy, with the central bank pledging to “do whatever is necessary to ensure bond markets remain functional and to achieve the yield target for 3-year AGS (Australian Government Securities).” 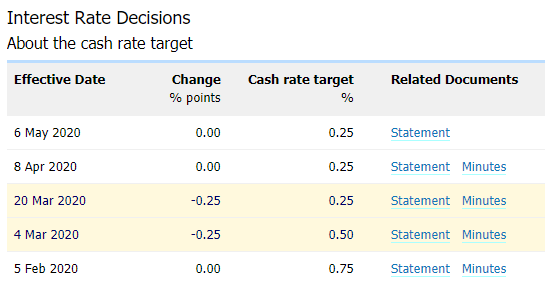 The policy statement suggests the RBA will stick to a wait-and-see approach for the foreseeable future even though the baseline forecast shows output falling “by around 10 per cent over the first half of 2020 and by around 6 per cent over the year as a whole” as governments across Australia gradually rollback the lockdown laws.

Efforts to restart the economy may keep the RBA on the sidelines throughout 2020 as the central bank insists that “a stronger economic recovery is possible if there is further substantial progress in containing the coronavirus in the near term and there is a faster return to normal economic activity.”

In turn, the RBA may merely buy time at the next meeting on June 2, and Governor Philip Lowe and Co. may continue to alter the forward guidance over the coming months as officials emphasize that “there has been a substantial, coordinated and unprecedented fiscal and monetary response in Australia to the coronavirus.”

However, it remains to be seen if a V-shaped recover takes place as the RBA sees a more pessimistic outcome “if the lifting of restrictions is delayed or the restrictions need to be reimposed,” and the central bank may come under pressure to further support the economy as fiscal stimulus programs like the Jobkeeper Payment is set to expire on September 27.

With that said, the Australian Dollar is likely to face headwinds if the RBA reverts back to a dovish forward guidance, but the failed attempt to test the March high (0.6685) warns of a potential shift in AUD/USD behavior as the exchange rate snaps the upward trending channel carried over from the previous month.