The price of gold consolidates following the failed attempt to test the November 2012 high ($1754), but the Federal Reserve meeting may heighten the appeal of the precious metal if the central bank shows a greater willingness to deploy more unconventional tools over the coming months.

The price of gold carves a fresh series of lower highs and lows ahead of the Federal Open Market Committee (FOMC) interest rate decision as the Great Lockdown appears to have passed its peak.

The price of gold may face a larger pullback going in May as governments across Australia unveil plans to gradually roll back the lockdown laws, with the US taking a similar approach as the Trump administration outlines a three-phased approach to reopen the economy.

President Donald Trump tweets “Many States moving to SAFELY & QUICKLY reopen” as the ‘stay at home’ order in Texas is set to expire on Thursday, and the efforts to gradually restart the advanced economies may drag on the price of gold as it curbs speculation for additional monetary support.

The unprecedented response by fiscal authorities may encourage the FOMC to alter the forward guidance for monetary policy, and Chairman Jerome Powell and Co. may adopt a less dovish tone as the central bank expands the scope of the Municipal Liquidity Facility (MLF), with the program to now offer “up to $500 billion in lending to states and municipalities.”

Nevertheless, the FOMC may keep the door open to implement more non-standard measures as the “timing of the resumption of growth in the U.S. economy depended on the containment measures put in place,” and the central bank may continue to utilize its balance sheet as the rate cuts from earlier this year pushed “the target range to its effective lower bound (ELB).” 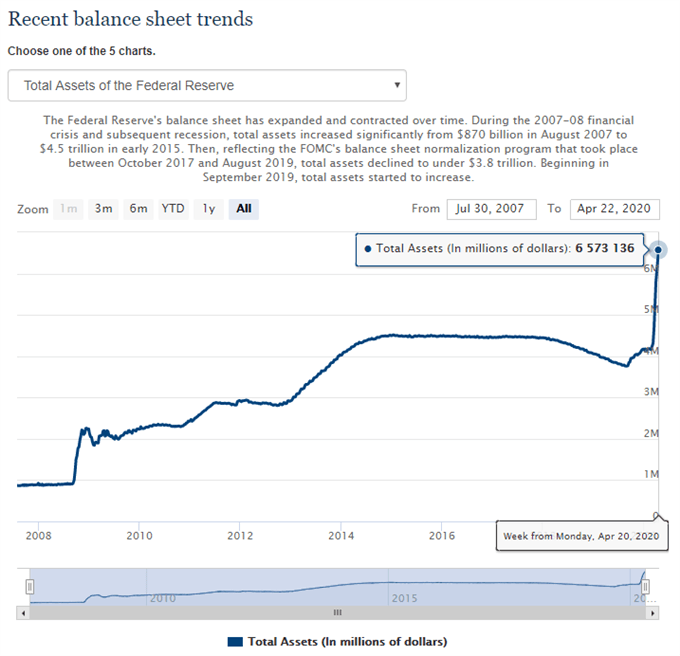 It remains to be seen if the dovish forward guidance will help to restore investor confidence as the FOMC relies on its unconventional tools to combat the economic shock from COVID-19, and the low interest rate environment along with the Fed’s ballooning balance sheet may continue to act as a backstop for goldas marketparticipants look for an alternative to fiat-currencies.

However, the price of bullion may continue to consolidate over the remainder of the month amid the string of failed attempt to test the November 2012 high ($1754), with the Relative Strength Index (RSI) highlighting a similar dynamic as a bearish formation takes shape.