NZD/USD trades in a narrow range following the failed attempt to test the monthly low (0.5843), but the exchange rate may face a more bearish fate ahead of the next Reserve Bank of New Zealand (RBNZ) meeting on May 13 as the central bank endorses a dovish forward guidance for monetary policy.

NZD/USD extends the rebound from the previous week as New Zealand starts to roll back the nationwide lockdown, and the exchange rate may continue to track the monthly range as the government takes gradual steps to restart the economy.

However, Prime Minister Jacinda Ardern urged New Zealanders to stay home if possible as the social distancing rules remain in place, and the change in lifestyle may undermine hopes for a V-shaped recovery if the behaviors sparked by the lockdown laws become a new norm.

In turn, the RBNZ may take additional steps to support the New Zealand economy as Governor Adrian Orr insists that the central bank has not ruled out a negative interest rate policy (NIRP), but it seems as though the Monetary Policy Committee (MPC) will continue to utilize the balance sheet in 2020 as “members agreed to provide forward guidance that the OCR (official cash rate) would stay at the level of 0.25 percent for at least 12 months.” 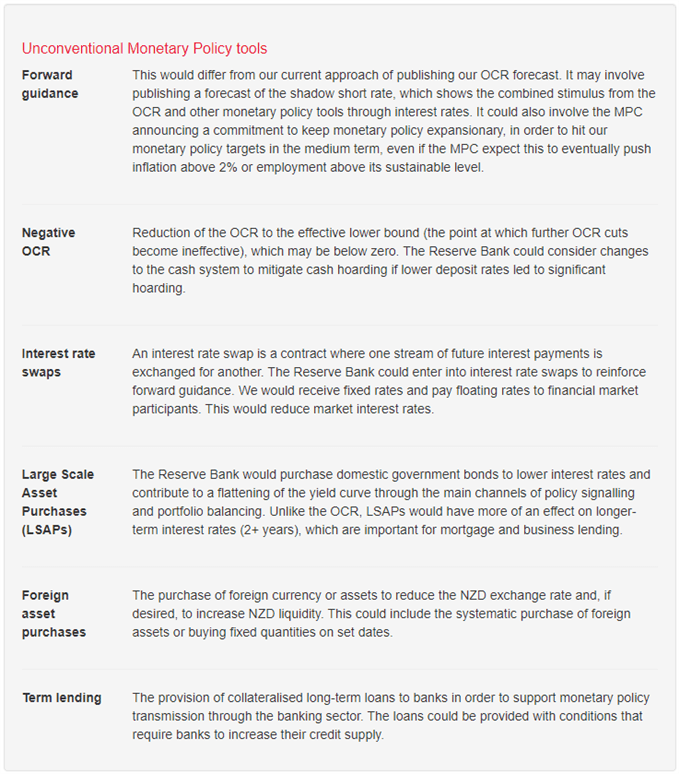 As a result, the RBNZ may continue to endorse a dovish forward guidance at its next meeting on May 13, and it remains to be seen if Governor Orr and Co. will deploy more unconventional tools over the coming months as the central bank expands the Large Scale Asset Purchase programme (LSAP) to include NZ$ 3B of Local Government Funding Agency (LGFA) debt.

With that said, the RBNZ may continue to push monetary policy into uncharted territory as the update to China’s Gross Domestic Product (GDP) report revealed a larger-than-expected decline in the growth rate, and speculation for additional monetary support may present headwinds for the New Zealand Dollar especially as Governor Orr keeps an open mind in directly monetizing New Zealand government debt.

Nevertheless, NZD/USD may face range-bound conditions going into May as it reverses course ahead of the monthly low (0.5843), with the April high (0.6131) on the radar as the exchange rate extends the rebound from the previous week.