EUR/USD has reversed course following the failed attempt to test the yearly low (1.0636), with the monthly high (1.1039) on the radar as the exchange rate initiates a fresh series of higher highs and lows.

EUR/USD extends the advance from the previous week as finance ministers representing the European Union (EU) agree on a EUR 540B stimulus package to combat COVID-19, and the unprecedented response may encourage the European Central Bank (ECB) to retain the current policy at its next meeting on April 30 as the Governing Council carries out the Pandemic Emergency Purchase Programme (PEPP). 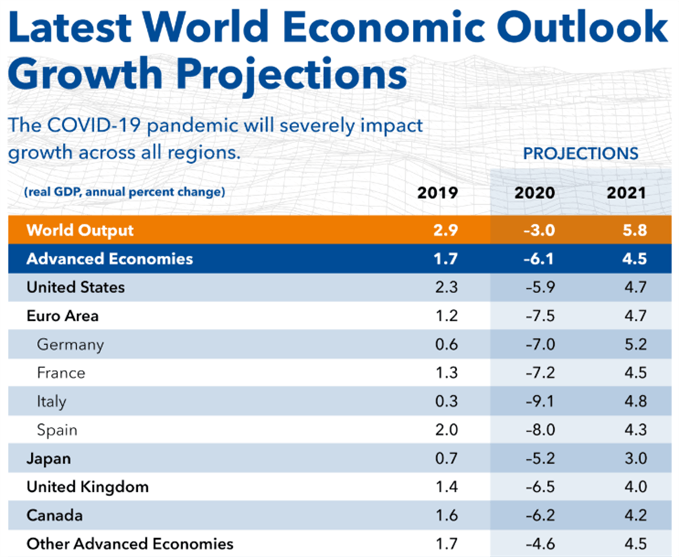 However, the ECB may come under pressure to further support the monetary union as the International Monetary Fund (IMF) forecasts advanced economies to contract 6.1% in 2020, with the Euro Area expected to lead the slowdown as the growth rate is projected to decline 7.5% this year.

The update to the IMF’s World Economic Outlook (WEO) report largely align with recent remarks from ECB Vice-President Luis de Guindos as the official warns “the global economy will enter recession and so will the European economy,” with the board member going onto say that “we will have to wait until 2021 to see a genuine recovery in economic activity.”

In turn, the ECB continue to rely on its asset purchase program to cushion the Euro Area as the account of the March 18 meeting insists that Outright Monetary Transactions (OMT) “had been designed to address a fundamentally different contingency,” and the Governing Council may continue to push monetary policy into uncharted territory as the central bank emphasizes its commitment to “to adjust all of its other instruments, as appropriate, including adjusting its policy rates in line with its forward guidance.”

With that said, the ECB’s dovish forward guidance may present headwinds for the Euro, but EUR/USD may track the broad range from March amid the failed attempt to test the yearly low (1.0636).