The price of gold clears the March high ($1704) as the Federal Reserve plans to provide $2.3T in loans to US households and businesses, and the precious metal may extend the advance from earlier this month if the Relative Strength Index (RSI) pushes into overbought territory.

The price of gold climbs to a fresh yearly high ($1724) as the Federal Reserve unveils the ‘Main Street Lending Program’ along with additional unconventional tools in order to “provide powerful support for the flow of credit in the economy.” 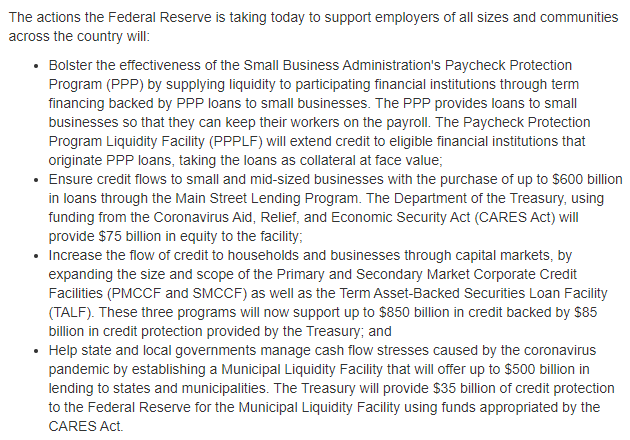 The announcement suggests the Federal Open Market Committee (FOMC) will continue to deploy non-standard measures to support the US economy as the central bank “remainscommitted to using its full range of tools to support the flow of credit to households and businesses to counter the economic impact of the coronavirus pandemic.”

At the same time, recent remarks by Fed Chairman Jerome Powell indicate that the FOMC may take additional steps to combat the economic shock as the central bank head pledges “to use these powers forcefully, proactively, and aggressively until we are confident that we are solidly on the road to recovery.” In turn, the FOMC may continue to endorse a dovish forward guidance at the next interest rate decision on April 29 as “the Fed's role is to provide as much relief and stability as we can during this period of constrained economic activity.”

The unprecedented efforts appear to have propped up investor confidence amid the advance in US equity prices, but it remains to be seen if the slew of non-standard measures will have unintended consequences as major central banks push their benchmark interest rate close to zero and rely on their balance sheets to boost economic activity. With that said, the low interest rate environment may continue to act as a backstop for goldas marketparticipants look for an alternative to fiat-currencies.

As a result, the broader outlook for bullion remains constructive as the reaction to the former-resistance zone around $1450 (38.2% retracement) to $1452 (100% expansion) helped to rule out the threat of a Head-and-Shoulders formation, with a similar scenario arising in March as the price of gold reversed course from the monthly low ($1451).