EUR/USD pares the advance from the yearly low (1.0636) as the European Central Bank (ECB) warns of a looming recession, and the exchange rate may consolidate over the coming days as it snaps the series of higher highs and lows from the previous week.

EUR/USD struggles to hold its ground as the ECB Vice President Luis de Guindos states that incoming data “indicate that a recession will take hold,” with the official going onto say that “each month will see a fall of approximately two percentage points in GDP” amid the lockdown in Europe.

In turn, Mr. Guindos insists that the ECB “will do everything possible to keep the euro together and to provide the best funding possible,” and it seems as though the Governing Council will keep the door open to implement more non-standard measures as the central bank remains reluctant to remains reluctant to push the main refinance rate, the benchmark for borrowing costs, into negative territory. 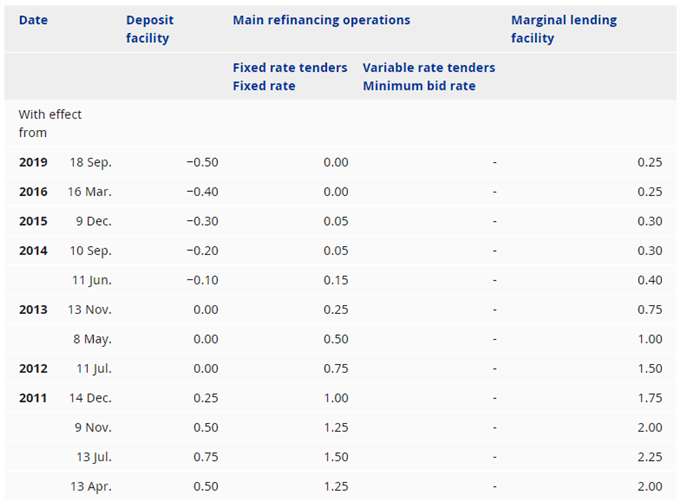 It remains to be seen if the ECB will continue to utilize its balance sheet to combat the weakening outlook for growth as the Governing Council launches the Pandemic Emergency Purchase Programme (PEPP), and the central bank may call upon European authorities to support the monetary union as “there are proposals to use the European Stability Mechanism or the European Investment Bank.”

Nevertheless, it seems as though the ECB will continue to endorse a dovish forward guidance as President Christine Lagardeemphasizes that the Governing Council is “fully prepared to increase the size of our asset purchase programmes and adjust their composition, by as much as necessary and for as long as needed,” and the unprecedented response may continue to produce headwinds for the Euro as the central bank pushes monetary policy into uncharted territory.

As a result, EUR/USD volatility may continue to pick up in 2020, and the US Dollar may outperform its European counterpart as the greenback benefits from the flight to safety.

With that said, the recent rebound in EUR/USD may prove to be short lived, and the exchange rate may exhibit a more bearish behavior over the coming days as it snaps the series of higher highs and lows from the previous week.