AUD/USD bounced back from a fresh yearly low (0.5506) as the Reserve Bank of Australia (RBA) delivered a “comprehensive package to support the Australian economy,” but the current environment may keep the exchange rate under pressure especially as the Relative Strength Index (RSI) pushes deeper into oversold territory.

AUD/USD consolidates following the slew of new measures taken by the RBA, with the central bank taming speculation for a zero-interest rate policy (ZIRP) as Governor Philip Lowe and Co. announce “a target for the yield on 3-year Australian Government bonds of around 0.25 per cent.” 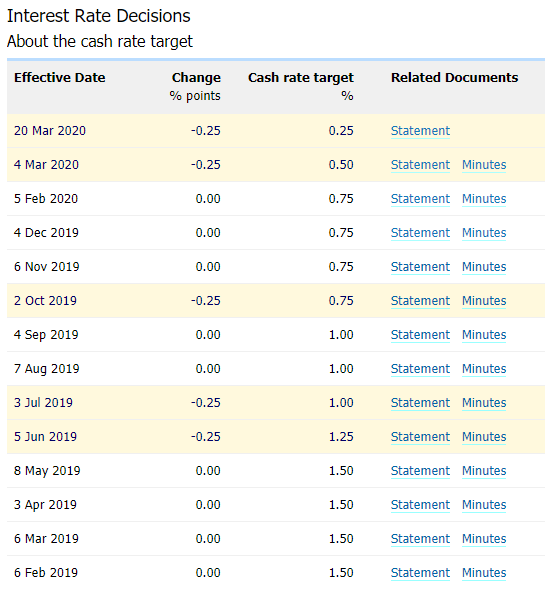 It seems as though the RBA opted for yield-curve control rather than a large scale asset purchase program as Governor Lowe emphasizes that “we are not setting objectives for the quantity and timing of bonds that we will buy, as some other central banks have done,” but the central bank may deploy additional unconventional tools over the coming months as the Federal Reserve establishes a USD swap line with Australia.

It remains to be seen if the RBA will announce more measures at its next meeting on May 5 as Treasurer Josh Frydenberg insists that the second fiscal stimulus program will be “complimentary” to the A$17.6B economic plan during an interview with Sky News, and the central bank may move to the sidelines as Governor Lowe states that “we feel like at the moment we’ve done enough.”

However, the sharp depreciation in the Australian Dollar may become a growing concern for the RBA as the central bank plans to make unsterilized purchases of Australian government bonds, and the board may show a greater willingness to intervene in the foreign exchange market as Governor Lowe pledges to do “whatever is necessary to make sure funding costs in Australia are low.”

With that said, AUD/USD may face additional headwinds as the RBA pushes monetary policy into charted territory, and the exchange rate may continue to exhibit a bearish behavior over the coming days as the Relative Strength Index (RSI) pushes deeper into oversold territory.