NZD/USD trades to a fresh yearly low (0.5691) as the Reserve Bank of New Zealand (RBNZ) stands ready to deploy unconventional tools, and the exchange rate may extend the series of lower highs and lows from the previous week as the Relative Strength Index (RSI) pushes deeper into oversold territory.

NZD/USD extends the decline following the emergency RBNZ rate cut to trade at its lowest level since 2009, with the exchange rate showing a limited reaction to the updated Gross Domestic Product (GDP) report even though New Zealand grew 1.8% during the last three-months of 2019 versus forecasts for a 1.7% print.

NZD/USD may continue to exhibit a bearish behavior as the RBNZ emphasizes that “Large Scale Asset Purchases of New Zealand Government bonds were the next best monetary tool available to the Committee,” and it seems as though Governor Adrian Orr and Co. will continue to push monetary policy into uncharted territory as the central bank also plans to “delay or slow down most of its regulatory initiatives for an initial period of six months.” 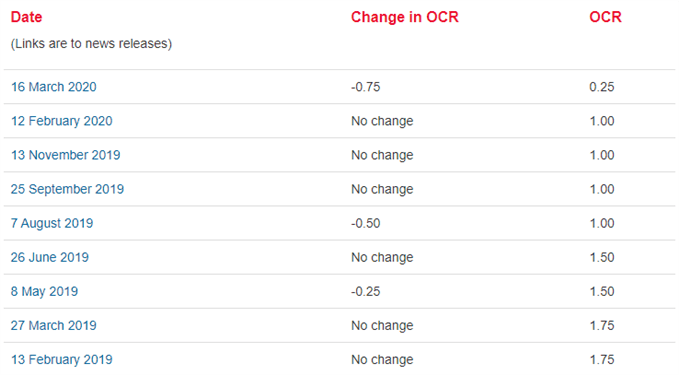 In turn, the RBNZ may resort to unconventional tools to combat the weakening outlook for global growth as the central bank insists that “a negative OCR would not be implemented,” and it remains to be seen if Governor Orr and Co. will make a major announcement at the next meeting on May 13 as Chief Economist Yuong Ha insists that the asset-purchase program would be ready “as soon as possible but certainly by the May round if we needed to” during an interview with Bloomberg News.

With that said, the RBNZ may continue to highlight a dovish forward guidance even though Prime Minister Jacinda Ardern prepares as “significant” fiscal stimulus package, and the New Zealand Dollar may face a more bearish fate over the coming days as NZD/USD extends the series of lower highs and lows from the previous week, while the Relative Strength Index (RSI) pushes deeper into oversold territory.