NZD/USD extends the rebound from the yearly low (0.6191) as the Federal Reserve delivers an emergency 50bp rate cut, and the exchange rate may stage a larger correction as the Relative Strength Index (RSI) bounces back from oversold territory and breaks out of the bearish formation from earlier this year.

NZD/USD retraces the decline from the previous month as the Federal Open Market Committee (FOMC) alters the course for monetary policy, and the update to the US Non-Farm Payrolls (NFP) report may do little to curb the recent rebound in the exchange rate even though the economy is anticipated to add 175K jobs in February. 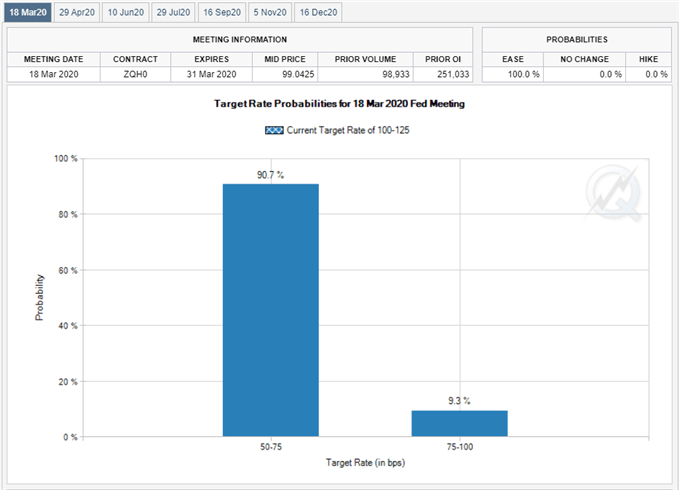 Fed Fund futures reflect 100% probability for another rate cut on March 18, with market participants pricing a 90% chance for a 50bp reduction, and the update to the Summary of Economic Projections (SEP) may reveal a material shift in the forward guidance for monetary policy as the central bank takes a proactive approach in combating COVID-19.

In turn, Fed officials are likely to project a lower trajectory for the benchmark interest rate, but it remains to be seen if the FOMC will prepare US households and businesses for a zero interest rate policy (ZIRP) as St. Louis Fed President James Bullard insists that market participants shouldn’t “prejudge” the March meeting. Mr. Bullard warns that “it’s unlikely we’re going to have that much different of information when we get to the March meeting,” but went onto say that “all options are on the table” as the coronavirus continues to drag on the global supply chain.

The weakening outlook for global growth may force the FOMC to implement lower interest rates throughout 2020 especially as President Donald Trump tweets that “the Federal Reserve is cutting but must further ease,” and the Reserve Bank of New Zealand (RBNZ) may face a similar fate when Governor Adrian Orr and Co. meet on March 25 as the coronavirus dampens the outlook for global growth.

Until then, NZD/USD may continue to retrace the decline from the previous month as the Relative Strength Index (RSI) bounces back from oversold territory and breaks out of the downward trend from earlier this year.