The recent decline in NZD/USD appears to have stalled ahead of the 2019 low (0.6204), but the bearish momentum may resurface as New Zealand is expected to post a trade deficit in January, while the Relative Strength Index (RSI) flirts with oversold territory.

Unlike its Australian counterpart, the New Zealand Dollar continues to track the range from the second half of 2019, and NZD/USD may consolidate over the remainder of the week as the exchange rate bounces back from the monthly low (0.6303).

The failed attempt to test the 2019 low (0.6204) may keep NZD/USD afloat ahead of the next Reserve Bank of New Zealand (RBNZ) meeting on March 25 as the central bank alters the forward guidance for monetary policy. 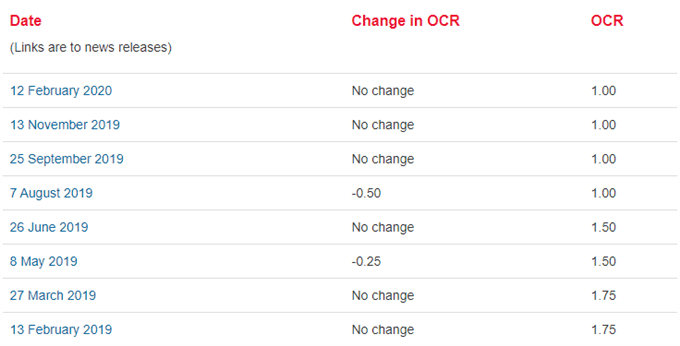 It seems as though the RBNZ is in no rush to insulate the economy from COVID-19 as Governor Adrian Orr and Co. “assume the overall economic impact of the coronavirus outbreak in New Zealand will be of a short duration, with most of the impacts in the first half of 2020.”

The RBNZ insists that “monetary policy has time to adjust if needed” after reducing the official cash rate (OCR) to a record low of 1.00% in 2019, and the central bank may largely endorse a wait-and-see approach over the coming months as “additional fiscal stimulus is reducing the burden onmonetary policy.”

However, fresh data prints coming of out of New Zealand may put pressure on the RBNZ to implement lower interest rates as the region is expected to post a trade deficit of NZD 533M in January.

The threat to the global supply chain posed by the coronavirus may force the RBNZ to respond, and it remains to be seen if Governor Orr and Co. will continue to push monetary policy into uncharted territory amid the weakening outlook for global growth.

Until then, NZD/USD may continue to track the rangefrom the second half of 2019 as the decline from earlier this year stalls ahead of the October low (0.6204). However, the bearish momentum may resurface as the Relative Strength Index (RSI) preserves the downward trend from January and flirts with oversold territory.