EUR/USD bounces back from a fresh monthly low (1.0891) following the semi-annual testimony with Federal Reserve Chairman Jerome Powell, but the bearish price action from the start of February may persist as the Relative Strength Index (RSI) flirts with oversold territory.

EUR/USD halts a six day losing streak as the prepared remarks from Fed Chairman Powell largely mirrored the discussion from the first meeting for 2020, and the reaction raises the scope for a rebound in the exchange rate appears to be reversing course ahead of the 2019 low (1.0879).

The fresh remarks from Chairman Powell suggest the Federal Open Market Committee (FOMC) will stick to the sidelines for the foreseeable future as Fed officials believe that “the current stance of monetary policy will support continued economic growth, a strong labor market, and inflation returning to the Committee's symmetric 2 percent objective.”

As a result, the FOMC may retain the status quo and attempt to buy time at the next interest rate decision on March 18 as “some of the uncertainties around trade have diminished recently.”

In contrast, the European Central Bank (ECB) may face a different fate even though President Christine Lagarde insists that “the euro area economy has been quite resilient to global shocks” as the Governing Council struggles to achieve its one and only mandate for price stability. 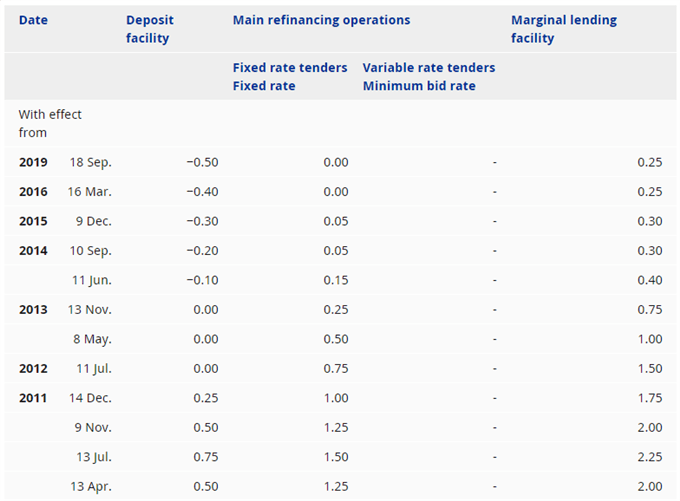 In turn, the ECB may continue to endorse a dovish forward guidance as Chief Economist Philip Lane insists that Governing Council has yet to hit the reversal rate, “the level at which the interest rate is so low that it would be counterproductive for bank credit creation.”

With that said, it remains to be seen if the ECB will implement more non-standard measures as the central bank remains reluctant to push the main refinance rate, the benchmark for borrowing costs, into negative territory, but the diverging paths between the FOMC and the ECB may continue to produce headwinds for EUR/USD as the “Governing Council continues to stand ready to adjust all of its instruments, as appropriate, to ensure that inflation moves towards its aim in a sustained manner.”