USD/CAD trades near the monthly high (1.3330) ahead of the semi-annual testimony with Federal Reserve Chairman Jerome Powell, but the Relative Strength Index appears to be on the cusp of flashing a textbook sell signal as the oscillator struggles to hold in overbought territory.

The October high (1.3348) sits on the radar for USD/CAD as the 34.5K expansion in Canada Employment fails to curb the advance from the start of the month, and fresh remarks from Chairman Powell may keep the exchange rate afloat as the central bank moves away from its rate easing cycle.

Chairman Powell may strike an upbeat tone in front of US lawmakers as “some of the uncertainties around trade have diminished recently,” and the central bank head may emphasize a wait-and-see approach as the Federal Open Market Committee (FOMC) monitors “the effects of the policy actions we took last year.”

In turn, the US Dollar may continue to outperform its Canadian counterpart ahead of the quarterly meeting in March if Chairman Powell tames speculation for lower interest rates.

However, the prepared remarks may merely reflect the discussion from the first meeting for 2020 as the FOMC believes that “the current stance of monetary policy is appropriate to support sustained economic growth, a strong labor market, and inflation returning to our symmetric 2 percent objective.” 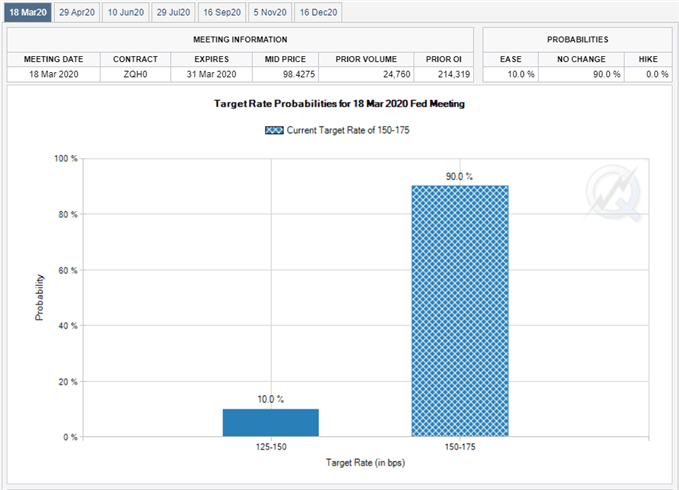 As a result, more of the same from the Chairman Powell may generate a limited reaction as Fed Fund futures reflects a 90% probability the FOMC will keep the benchmark interest rate in its current threshold of 1.50% to 1.75% on March 18.

With that said, it remains to be seen if the Bank of Canada (BoC) will continue to change its tune over the coming months as the “Governing Council will be watching closely to see if the recent slowdown in growth is more persistent than forecast.”

The BoC may sound more dovish at the next meeting on March 4 as “data for Canada indicate that growth in the near term will be weaker, and the output gap wider, than the Bank projected in October,” and the central bank may come under pressure to implement lower interest rates as “the weaker data could also signal that global economic conditions have been affecting Canada’s economy to a greater extent than was predicted.”

Nevertheless, Governor Stephen Poloz may retain the status quo ahead of his departure in June as “the Bank expects inflation will stay around the 2 percent target over the projection horizon, with some fluctuations in 2020 from volatility in energy prices.” With that said, a further shift in the BoC’s forward guidance may keep USD/CAD afloat in 2020, but the near-term advance in USD/CAD may prove to be short-lived as Governor Poloz and Co. remain reluctant to reverse the rate hikes from 2018.

As a result, lack of momentum to test the October high (1.3348) may spur a pullback in USD/CAD, and the Relative Strength Index appears to be on the cusp of flashing a textbook sell signal as the oscillator struggles to hold in overbought territory.