The price of gold may continue to retrace the decline from earlier this month as the precious metal holds above the January low ($1517), but recent developments in the Relative Strength Index (RSI) offer a mixed outlook as the oscillator struggles to retain the upward trend from December.

The price of gold extends the range bound prince action from earlier this week as the US and France reach a trade truce, and the precious metal may continue to consolidate ahead of the Federal Reserve interest rate decision amid the narrowing threat of a global trade war.

With Phase One of the US-China trade deal in place, the Federal Open Market Committee (FOMC) may stick to the status quo as “participants regarded the current stance of monetary policy as likely to remain appropriate for a time.”

The latest remarks from Philadelphia Fed President Patrick Harker suggest the lackluster Non-Farm Payrolls (NFP) report will do little to influence the monetary policy outlook as the 2020 voting member on the FOMC anticipates the labor market to “return to a trend of creating about 100,000 net new jobs per month.”

In light of the ongoing expansion in employment, Mr. Harker went onto say he still believes that “inflation will rise to meet our goal,” and the FOMC may stick to the sidelines for the foreseeable future as “the economy is looking pretty good.” 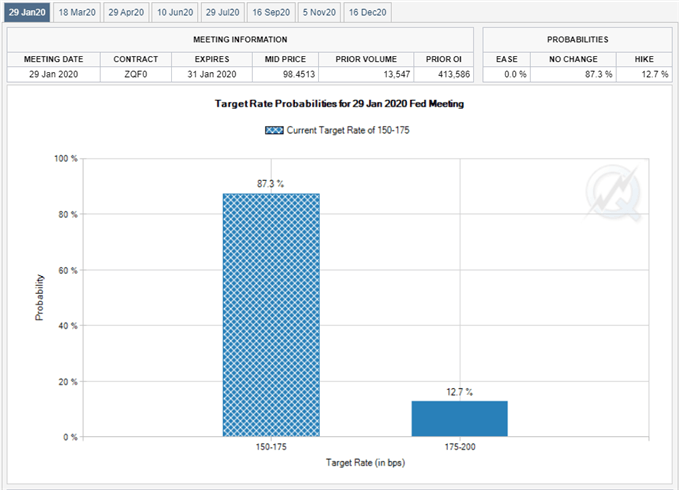 With that said, Fed Fund futures still show a greater than 80% probability the FOMC will keep the benchmark interest rate in the current threshold of 1.50% to 1.75% on January 29, and the Chairman Jerome Powell and Co. may largely endorse a wait-and-see approach for monetary policy as “a number of participants observed that the domestic economy was showing resilience in the face of headwinds from global developments.”

More of the same from the FOMC may sap the appeal of gold as the central bank moves away from its rate easing cycle, but the ongoing shift in US trade policy may put pressure on the Fed to further insulate the economy as the Trump administration remains reluctant to rollback tariffs.

It remains to be seen if Fed officials will adjust the forward guidance at the next quarterly meeting in March when the central bank updates the Summary of Economic Projections (SEP), but the weakening outlook for global growth along with the lingering threat of a global trade war my keep the price of bullion afloat as market participants look for an alternative to fiat-currencies.

In turn, the broader outlook for the price of gold remains constructive, with the reaction to the former-resistance zone around $1447 (38.2% expansion) to $1457 (100% expansion) helping to rule out the threat of a Head-and-Shoulders formation as the region acts as support.