USD/CAD extend the advance from the monthly low (1.2957) as the Relative Strength Index (RSI) bounces back from oversold territory, but the recent weakness in the Canadian Dollar may prove to be short-lived as the Bank of Canada (BoC) shows little intentions of rolling back the rate hikes from 2018.

USD/CAD appears to be stuck in a narrow range following Canada’s Employment report as the fresh figures showed the economy adding 35.2K jobs in December, and the ongoing improvement in the labor market may keep the BoC on the sidelines as the Business Outlook Survey (BOS) “continued to edge up after falling below zero in early 2019.” 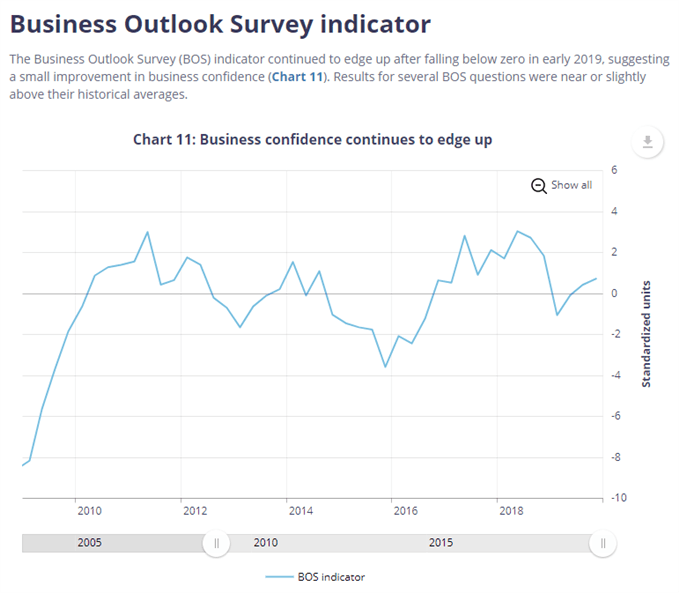 The update to the quarterly survey highlights an improved outlook for Canada as “expectations for future sales growth remain positive,” with the report going onto say that “several businesses intend to add staff to meet expected increases in demand or to expand production.”

The improvement in business sentiment may encourage the BoC to retain the current policy at its first meeting for 2020 and the central bank may continue to endorse a wait-and-see approach as Governor Stephen Poloz emphasizes that the “labour market has shown a healthy trend over the past year.”

Recent remarks from Governor Poloz suggests the central bank is in no rush to alter the monetary policy outlook as “fundamental demand for housing appears to be outpacing our ability to build new homes, which can put renewed upward pressure on prices,” and the central bank may stick to the same script on January 22 as officials “are watching for signs that adverse impacts of trade disputes are being felt beyond the export sectors.”

In turn, the Canadian Dollar may continue to outperform its US counterpart as Governor Poloz and Co. remain reluctant to reverse the rate hikes from 2018, and USD/CAD may exhibit a more bearish behavior this year as it snaps the range bound price action from the second half of 2019.

However, the monthly opening range raises the scope for a larger rebound in USD/CAD as it fails to test the 2019 low (1.2952) during the first full week of January, with the Relative Strength Index (RSI) highlighting a similar dynamic as the oscillator bounces back from oversold territory and offers a textbook buy signal.