EUR/USD extends the advance following the US Non-Farm Payrolls (NFP) report, but the opening range for 2020 raises the scope for a further decline in the exchange rate as the near-term correction fails to produce a test of the August high (1.1250).

EUR/USD pared the decline from earlier this month as the US economy added 145K jobs in December versus forecasts for a 160K print, and the US Dollar may face additional headwinds as the lackluster data print puts pressure on the Federal Reserve to revisit its rate easing cycle.

A deeper look at the NFP report showed Average Weekly Earning unexpectedly narrowed to 2.9% from 3.1% during the same period, and the slowdown in household earnings may become a concern for the Federal Open Market Committee (FOMC) as it dampens the outlook for private sector consumption.

According to the FOMC Minutes, the committee “generally expected that consumption spending would likely remain on a firm footing, supported by strong labor market conditions, rising incomes, and solid consumer confidence,” but indications of a less robust economy may force the central bank to adjust the forward guidance for monetary policy as Chairman Jerome Powell insists that “if developments emerge that cause a material reassessment of our outlook, we would respond accordingly.”

In turn, Fed officials may project a lower trajectory for the benchmark interest rate when the central bank updates the Summary of Economic Projections (SEP) in March, but the FOMC may stick to the sideline at its first interest rate decision for 2020 as “participants regarded the current stance of monetary policy as likely to remain appropriate for a time as long as incoming information about the economy remained broadly consistent with the economic outlook.” 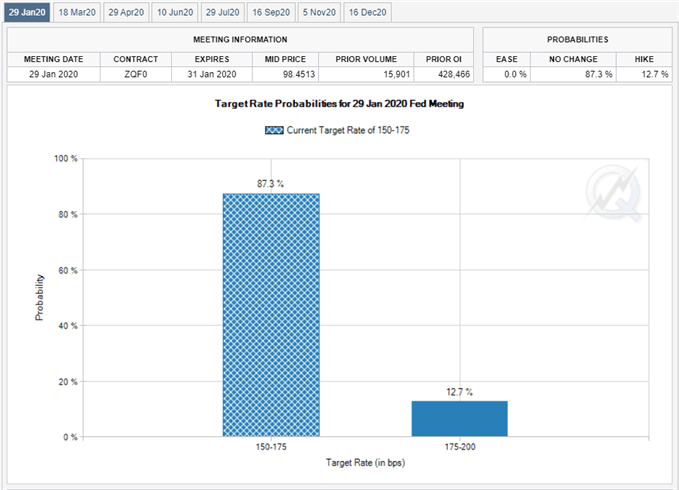 In fact, Fed Fund futures reflects a greater than 80% probability Chairman Powell and Co. will keep the benchmark interest rate in its current threshold of 1.50% to 1.75% on January 29, and the FOMC’s wait-and-see approach for monetary policy may rattle the near-term correction in EUR/USD as the European Central Bank (ECB) continues to expand its balance sheet by EUR 20B/month.

As a result, the EUR/USD advance following the NFP report may prove to be short-lived, with theopening range for 2020casting a bearish outlook for the exchange rate as the correction from the 2019 low (1.0879) fails to produce a run at the August high (1.1250).