USD/CAD fails to test the 2019 low (1.2952) during the first full week of January, and the bearish momentum appears to be abating as the Relative Strength Index (RSI) bounces back from oversold territory and flashes a textbook buy signal.

USD/CAD may stage a larger rebound ahead of the ‘fires side chat’ with Bank of Canada (BoC) Governor Stephen Poloz as the exchange rate initiates a fresh series of higher highs and lows.

It remains to be seen if the BoC will reveal anything new ahead of Canada’s Employment report as US lawmakers appear to be on track to pass the United States-Mexico-Canada Agreement (USMCA) over the coming days.

In turn, developments coming out of the US may have a greater impact on USD/CAD as the ADP Employment survey shows private sector payrolls increasing 202K in December versus expectations for a 160K rise.

The data bodes well for the Non-Farm Payrolls (NFP) report, which is anticipated to show the US economy adding 160K jobs in December, and a positive development may keep USD/CAD afloat as it encourages the Federal Reserve to retain the current policy at its first meeting for 2020.

The ongoing improvement in the labor market may keep the Federal Open Market Committee (FOMC) on the sidelines at the next interest rate decision on January 29 as “a number of participants observed that the domestic economy was showing resilience in the face of headwinds from global developments.” 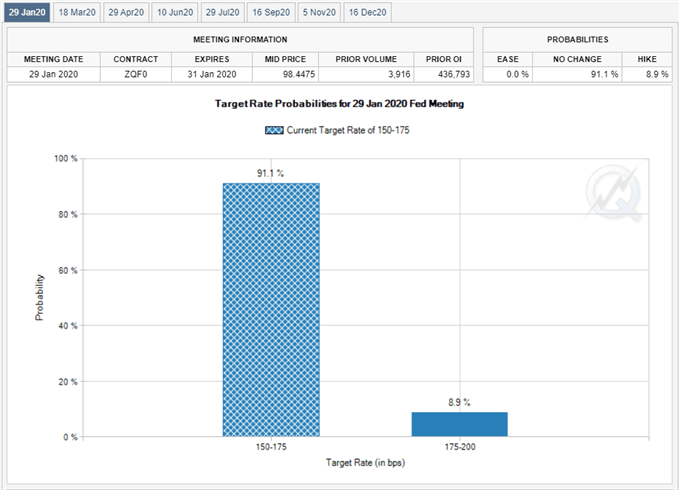 In fact, Fed Fund futures shows a 90% probability the FOMC will keep the benchmark interest rate in its current threshold of 1.50% to 1.75%, and Chairman Jerome Powell and Co. may merely attempt to buy time as “participants regarded the current stance of monetary policy as likely to remain appropriate for a time as long as incoming information about the economy remained broadly consistent with the economic outlook.”

However, the ongoing shift in US trade policy may force the FOMC to further insulate the economy in 2020 as the Office of the US Trade Representative (USTR) insists that France’s Digital Services Tax is “unreasonable,” with the Trump administration looking to implement “additional duties of up to 100 percent on certain products of France.”

The threat of a trade war with Europe may push the FOMC to reestablish its rate easing cycle over the coming months, and Fed officials may project a lower trajectory for the benchmark interest rate when the central bank updates the Summary of Economic Projections (SEP) in March as “global developments, related to both persistent uncertainty regarding international trade and weakness in economic growth abroad, continued to pose some risks to the outlook.”

As a result, the US Dollar may trail its Canadian counterpart in 2020, but recent price action in USD/CAD raises the scope for a larger rebound in the exchange rate as it initiates a series of higher highs and lows following the failed attempt to test the 2019 low (1.2952).