The price of gold trades in a very tight range even though the US and China agree on a trade deal, but recent developments in the Relative Strength Index (RSI) foreshadows a potential change in market behavior as the oscillator breaks out of the bearish formation from earlier this year.

The lack of detail surrounding the Phase One trade deal may keep gold prices in a narrow range as China Foreign Ministry Spokesperson Geng Shuang states that the “two sides still need to go through necessary procedures including legal reviewing and translation proofreading” before signing the agreement.

Nevertheless, easing tensions between the US and China may encourage the Federal Reserve to retain a wait-and-see approach at the next interest rate decision on January 29 as Chairman Jerome Powell and Co. insist that the “economic outlook remains a favorable one despite global developments and ongoing risks.”

In fact, the update to the Summary of Economic Projections (SEP) indicates the Federal Open Market Committee (FOMC) will stick to the sidelines for the foreseeable future as the dot-plot shows the benchmark interest rate sitting in its current threshold of 1.50% to 1.75% throughout 2020.

However, the FOMC may reestablish its rate easing cycle as US President Donald Trump tweets that it “would be sooo great if the Fed would further lower interest rates,” and the central bank could be forced to alter the forward guidance as the administration initiates“a process to assess increasing the tariff rates and subjecting additional EU products to the tariffs.” 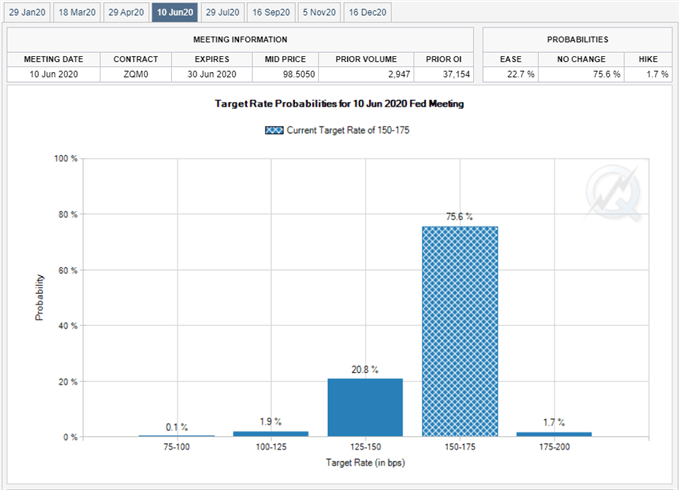 The ongoing shift in US trade policy may push the FOMC to further insulate the economy in 2020, with Fed Fund futures reflecting budding expectations for a June rate cutas Chairman Powell warns that “if developments emerge that cause a material reassessment of our outlook, we would respond accordingly.”

In turn, Fed officials may change their tune over the coming months, and speculation for lower interest rates along with the weakening outlook for global growth may keep gold prices afloat as market participants look for an alternative to fiat-currencies.

Moreover, the reaction to the former-resistance zone around $1447 (38.2% expansion) to $1457 (100% expansion) helps to rule out the threat of a Head-and-Shoulders formation as the region appears to be acting as support.