NZD/USD pulls back from the monthly high (0.6576) as attention turns to the Federal Reserve’s last meeting for 2019, and the Relative Strength Index (RSI) may offer a textbook sell-signal as the oscillator struggles to hold in overbought territory.

NZD/USD fails to extends the series of higher highs and lows from the previous week as the Federal Open Market Committee (FOMC) is widely expected to retain the current policy on December 11.

The Fed interest rate decision may undermine the near-term correction in NZD/USD as the central bank appears to be moving away from its rate easing cycle. 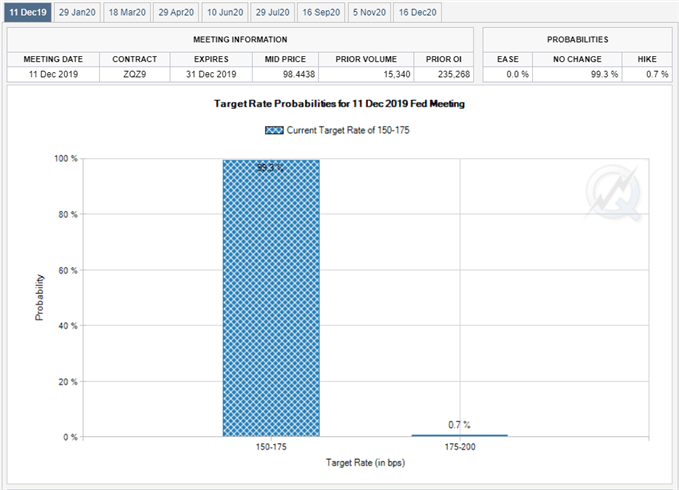 Fed Fund futures continue to show a greater than 90% probability the FOMC will keep the benchmark interest rate in its current threshold of 1.50% to 1.75%, and the update to the US Non-Farm Payrolls (NFP) report may encourage the committee to tame speculation for lower interest rates amid the ongoing improvement in the labor market.

In turn, the FOMC may largely endorse a wait-and-see approach for the foreseeable future as Chairman Jerome Powell and Co. see “the current stance of monetary policy as likely to remain appropriate as long as incoming information about the economy remains broadly consistent with our outlook of moderate economic growth.”

However, it remains to be seen if Fed officials will alter the forward guidance when they update the Summary of Economic Projections (SEP), and a downward revision in the interest rate dot-plot may produce a bearish reaction in the US Dollar as the central bank prepares households and businesses for a more accommodative stance.

The push for greater transparency is likely to influence the financial markets as traders gauge the future path for monetary policy, and a material adjustment to the SEP may keep NZD/USD afloat if Chairman Powell and Co. forecast a lower trajectory for the benchmark interest rate.

Moreover, the ongoing shift in US trade policy may also impact NZD/USD as the Trump administration appears to be on track to raise China tariffs on December 15.

With that said, waning hopes for US-China trade deal may produce headwinds for the New Zealand Dollar, and the near-term correction in NZD/USD may unravel over the coming days as the exchange rate snaps the string of higher highs and lows from the previous week.

At the same time, the Relative Strength Index (RSI) may offer a textbook sell-signal as the oscillator pulls back from overbought territory.