The price of gold struggles to retain the rebound from the previous week following a batch of positive data prints coming out of China, but recent price action limits the downside risk for the precious metal as the former-resistance zone around $1447 (38.2% expansion) to $1457 (100% expansion) offers support.

The price of gold continues to track the range bound price action from November as China’s Purchasing Manager Index (PMI) for both manufacturing and serviced-based activity instills an improved outlook for global growth.

China’s Manufacturing PMI climbed to 50.2 from 49.3 in October to mark the first reading above 50.0 since April, with the gauge for serviced-based activity also beating market expectations as the index climbed to 54.4 from 52.8 during the same period.

The data prints appear to be dragging on gold prices as it boosts risk sentiment, but growing tensions between the US and China may keep the precious metal afloat as President Donald Trump shows little intentions of rolling back tariffs.

It remains to be seen if the US and China will strike a deal before the Trump administration implements additional tariffs on December 15, and hopes for an imminent trade agreement may quickly fade as Foreign Ministry Spokesperson, Geng Shuang, insists that “China will take strong counter-measure” against the Hong Kong Human Rights and Democracy Act of 2019.

Nevertheless, it seems as though the Federal Open Market Committee (FOMC) will take a break from its rate easing cycle after reducing the benchmark interest rate for three consecutive meetings, and the central bank may merely attempt to buy time on December 11 as Chairman Jerome Powell and Co. see “the current stance of monetary policy as likely to remain appropriate as long as incoming information about the economy remains broadly consistent with our outlook of moderate economic growth.” 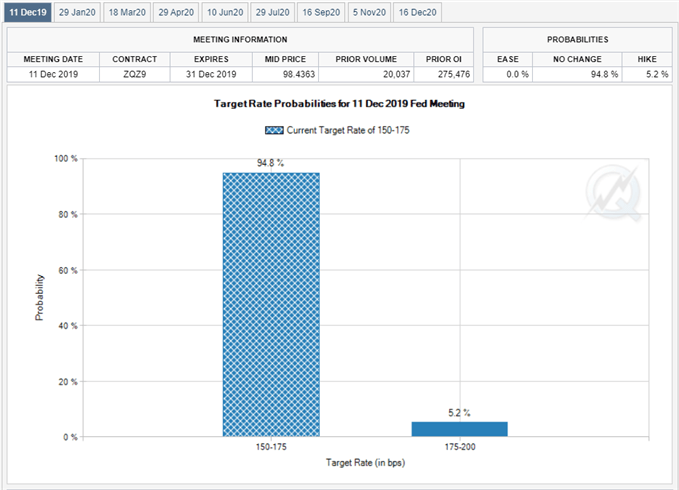 In turn, Fed Fund futures show a greater than 90% probability the FOMC will retain the current policy at its last meeting for 2019, but the central bank may take additional steps to insulate the US economy in 2020 as the FOMC Minutes revealed that “many participants continued to view the downside risks surrounding the economic outlook as elevated.”

As a result, the Fed may continue to adjust the forward guidance for monetary policy as the central bank updates the Summary of Economic Projections (SEP) in December, and another downward revision in the interest rate dot-plot may heighten the appeal of gold as market participants look for a hedge against fiat currencies.

With that said, developments surrounding the US-China trade negotiations may continue to influence the near-term outlook for gold prices, but the reaction to the former-resistance zone around $1447 (38.2% expansion) to $1457 (100% expansion) helps to rule out the threat of a Head-and-Shoulders formation as the region appears to be acting as support.